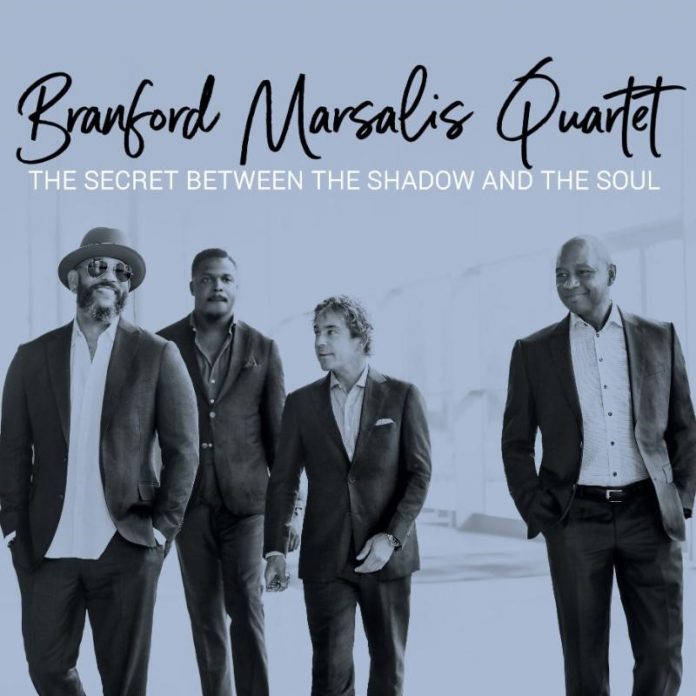 The Branford Marsalis Quartet announce the release of their new album, The Secret Between the Shadow and the Soul, on March 1. The new album finds the celebrated ensemble at a new peak, addressing a kaleidoscope of moods with inspiration and group commitment.

The quartet that saxophonist Branford Marsalis has led for the past three decades has always been a model of daring, no-apologies artistry, of ever-widening musical horizons and deepening collective identity. With likeminded support from pianist Joey Calderazzo and bassist Eric Revis (each with 20 years of service to the group) and drummer Justin Faulkner (the “rookie” who has been aboard since 2009), the band has long been a model of how to sustain and enlarge a musical outlook that is both historically and stylistically inclusive. Successive recordings have revealed new plateaus, and The Secret Between the Shadow and the Soul, the band’s first since 2016’s acclaimed Upward Spiral with guest Kurt Elling and first pure quartet effort since 2012’s Four MFs Playin’ Tunes, captures a new emphasis on both how to express and how to document the music.

“Working with Kurt for a year and a half took me back to what I learned in hindsight from my gig with Sting,” Marsalis explains. “Working with a singer changes you in ways you don’t realize. When I started playing jazz after my background in R&B, all the possibilities I discovered led me to play solos that went on and on. Sting said, `No, you’ve got 45 seconds,’ which did more than just cause me to edit. It taught me to focus on the melodies, to get to the point.”

The gigs that followed Upward Spiral had a similar effect on the rest of the quartet. “The guys in the band hadn’t been in that position for a long time, either, and it totally changed how we play. We became tighter, because it was more about what we could do to support.” As a result, Marsalis realized that he could no longer be satisfied with the creative tension sparked when new material was confronted in the recording studio. “I still like the idea of having everyone bring in whatever they want to bring in when it’s time to record and seeing what we can develop,” he admits, “but we couldn’t just take the `jam session’ approach to recording anymore. We had to go out and work the music.”

So after an initial get-acquainted week of gigs and studio work at the Ellis Marsalis Center in New Orleans in October 2017, the band hit the road, probing and absorbing the new material as it toured the world. “In June,” says Marsalis, “when we had five days off in Melbourne, I asked the guys if they wanted to have fun or to work. We were ready to deal with the music.” In the Alexander Theatre at Monash University in Clayton, Australia, the band documented the seven latest additions to its already prodigious repertoire.

The result is as complete a picture as one can assemble of the Marsalis Quartet within the confines of an hour. As usual there is compositional input from the veteran members, with Revis supplying the surging “Dance of the Evil Toys” and more tensile yet equally dynamic “Nilaste,” while Calderazzo reinforces the lyrical compositional yin to his virtuosic keyboard yang in “Cianna” and “Conversation Among the Ruins.” In addition to the leader’s own “Life Filtering from the Water Flowers,” with one of his most deeply felt and keenly shaded tenor saxophone solos, there are two of the more challenging jazz jewels of the mid-seventies, Andrew Hill’s “Snake Hips Waltz” and Keith Jarrett’s “The Windup.”

Whether navigating the quirky three-bar phrases of Hill’s piece or the elegant composure of “Cianna,” the rambunctious mechanisms of “Evil Toys” or the haunting ruminations of “Life Filtering,” the quartet generates distinct and unerringly apt sonic profiles. “Sonny Rollins provided the template for playing each piece with a ton of vocabulary and how to use the sound of one’s instrument,” Marsalis notes. “With us, it’s all about sound and the power it has to create emotion. When you deal with sound, you don’t play the same thing twice in a row. You listen to each other, and every song is different.”

Other influences, ranging from European opera and African percussion ensembles to such saxophone beacons as Ben Webster, Wayne Shorter, John Coltrane and Ornette Coleman, have shaped Marsalis’s command at non-verbal storytelling. “My approach in both writing and soloing is melodic and rhythmic, with harmony third,” he stresses. “We mold the harmony to the melody, where too many people let the harmony dictate. And we play in the cracks. I want to channel that vibe of all the great music I’ve heard, but to apply my own ideas.”

Marsalis still finds that the perfect vehicle for realizing his goals is his stellar working band. “Some musicians may need to work in different projects to create the illusion of sounding different by changing the context, whereas we are confident that we can adjust our group sound so we don’t have to change the context. What always appealed to me were the great bands, not just the great players who could start and stop at the same time. Staying together allows us to play adventurous, sophisticated music and sound good. Lack of familiarity leads to defensive playing, playing not to make a mistake. I like playing sophisticated music, and I couldn’t create this music with people I don’t know.”

The Secret Between the Shadow and the Soul confirms Branford Marsalis’s vision. It is sophisticated, adventurous and anything but defensive, and it captures a great band sounding better than ever.