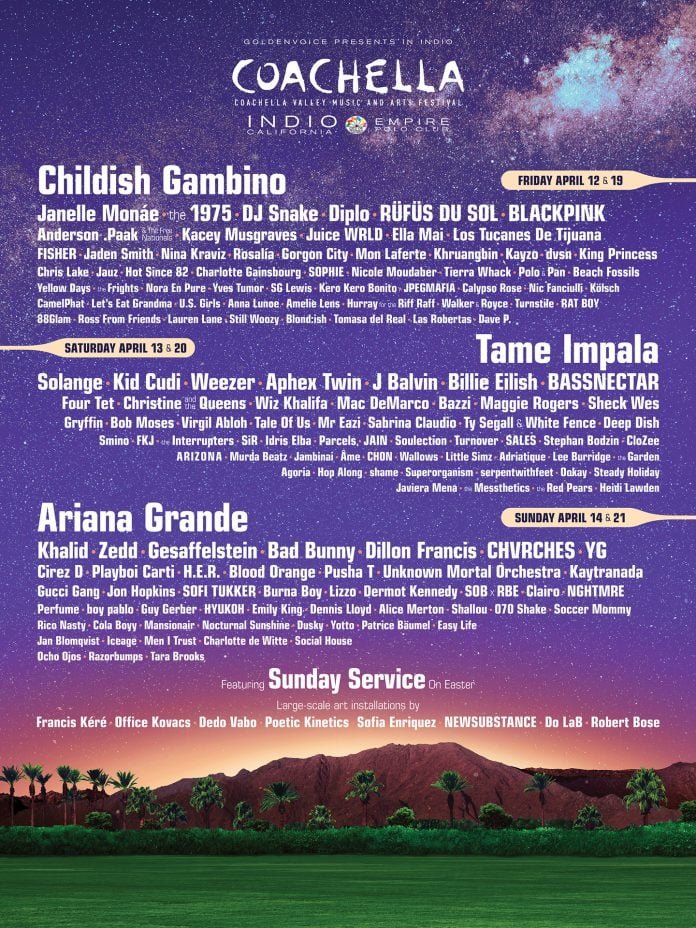 For the ninth year in a row, YouTube continues to take the magic of Coachella beyond the Indio desert and into the homes and phones of millions of people around the world with the exclusive two-weekend live stream of Coachella 2019. YouTube is providing a global stage for artists and fans to connect with live stream performances from headliners to some of the biggest artists on the rise including Childish Gambino, Ariana Grande, Tame Impala, Kacey Musgraves, Billie Eilish, BLACKPINK, Juice WRLD, Kid Cudi, Wiz Khalifa, Gryffin, Maggie Rogers, Chvrches Little Zimz, Cola Boyy and many more.

YouTube Music is turning it up a notch at Coachella 2019, making sure music fans — no matter where they are — can enjoy the world’s preeminent music festival in convenient and immersive new ways.

YouTube’s Weekend 1 live stream, presented by T-Mobile in the US, and Garnier and Coca-Cola in Canada, will give music fans around the world the best seats in the desert for groundbreaking performances from their favorite artists when they tune into Coachella’s YouTube Channel on any screen (desktop, mobile and living room) and within the YouTube Music app. In addition, fans will get treated to a one-time premiere of the new Childish Gambino film, “Guava Island,” featuring Rihanna.

Fans tuning in will have their choice of three live stream feeds with different artists performing simultaneously. Programming starts at 4pm PT on Friday, April 12 and runs through the weekend. To ensure you don’t miss your favorite performance, personalized viewing schedules can be created and live stream channels will automatically change to artists selected by fans.

Highlights from the weekend will be available through a video-on-demand hub, with co-hosts Nadeska Alexis, Valerie Lee, and special guests to bring fans interviews with artists and creators from throughout the festival.

For the first time ever, YouTube Music and Coachella will keep the cameras rolling on weekend 2, with a carefully curated live stream sponsored by Pantene & CALVIN KLEIN in the US, and Garnier and Coca-Cola in Canada. Coachella Curated, hosted by Jason Bentley from KCRW, will take a deep dive into the festival experience and deliver fans a slate of original content — encore and live performances, artist commentary, mini-docs, animated adventures and more — to accompany the best bits of live music and in-studio interviews with Coachella performers.

Coachella Curated sets its sights on artists from across the line-up and captures them onsite and off, spanning the globe to share stories from the homes of headliner performers, festival favorites and newly discovered talent. These traveling tales—filmed on six continents with Coachella’s Paul Tollett—offer a unique look at the multinational energy that comes together on the Empire Polo Grounds before beaming back out via YouTube.

Confirmed artists appearing in the Coachella Curated live stream display the diversity of talent taking the stage in Indio. Weekend 2 programming and live stream schedule will be available soon.

The YouTube Music app (iOS, Android) will be home to this year’s most complete Coachella music experience with the launch of live streaming. Whether you’re at home on the couch or at the pool in Indio, you can enjoy playlists based on this year’s lineup such as The Lineup, Hip-Hop, Latin, watch or listen in audio-only mode to the live stream both weekends, and check out performance clips after the festival is over.

YouTube will make history with a first-ever broadcast of a festival live stream on New York City’s iconic Times Square big screen, giving East Coast music fans a chance to gather together and share in the Coachella experience. YouTube will stream BLACKPINK’s highly anticipated performance on The Beast screen in Times Square at 11:50pmET on Friday April 12, 2019.

2019 will go down as Miquela‘s first-ever appearance at Coachella and first time hosting on video! The nineteen-year-old robot is teaming up with YouTube Music to host artist interviews with 2019 Coachella performers including  J Balvin, King Princess, and more. Check out her interviews during the webcast on Coachella’s YouTube Channel and across @youtubemusic and @youtube on socials.