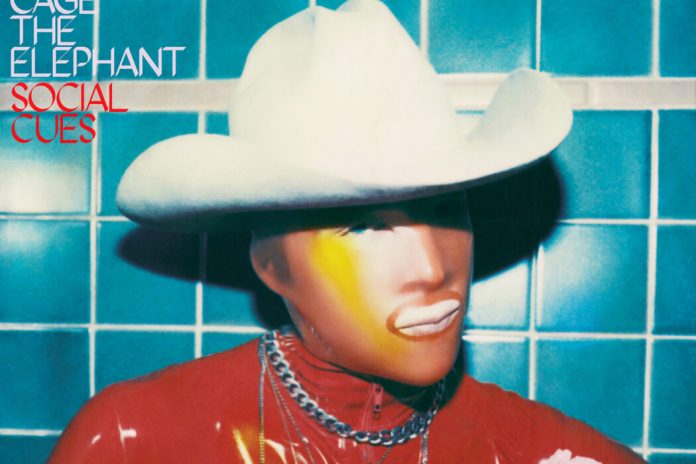 ‘Social Cues’ is the newly released album of the Kentucky band Cage the Elephant. Launched on the 19th of April, the collection is available on Spotify already, and it counts with a special participation of Beck, featured on the song Night Running. The track has already its own videoclip, published on Youtube last week , where Matt Shultz and the gang get into a retro themed trip with the iconic Los Angeles musician.

Cage the Elephant have been hitting the rock charts pretty hard during the last decade, but this album confirms a tendency to move away from that label. Since 2008, they have achieved first place in the Billboard Alternative Songs for eight times, same number of times of U2 and just behind Red-Hot Chili Peppers, Linkin Park, Green Day and Foo Fighters.

However, the leadman Matt Shultz, on an interview to Uproxx, one week before the album release, rejected the duties of keeping the rock spirit alive. Asked whether they would keep their traditions of classic rock or move away, just like Arctic Monkeys did on their last album Tranquility Hotel and Casino, Matt already hinted on the possibilities of going into a path of their own.

“We think about things much more based in each song and much more on a level of character”, he said. “But we try to pull away from anything that is persona-based, and I mean rooted in rock stardom or rock and roll or hip-hop or any of those words you might associate with a genre”. He admitted the band is more focused “on the specifics, like the communitive properties of songwriting”.

According to Shultz, the band is not keen on being attached with the “rock and roll” label and they are eager to experiment and do their own thing, based also on the opportunities that technology offers to musicians.

The voice of the ‘Elephants’ believes that people “forget the versatility of several instrumentalists composing together”. “You don’t have to be tied down to those confines. I’m just really excited with all the new software that’s emerging, all the new technology and instruments, and the ideas of approach”.

Further in the interview, Matt assumed one of his influences is the iconic legacy of David Bowie. “It was so incredible that he was entrenched in the avant-garde mediums and styles but was very aware of what was happening in contemporary culture”, he confesses.

Nonetheless, after four years, the Elephants are loose again and, although, the composition happened around the same time of Matt Shultz’s divorce from model Juliette Bechs, don’t expect a melancholic compilation reminiscing on the past. ‘Social Cues’ has somewhat of a sci-fi influence, with part being inspired by the film collection of John Carpenter, specially focusing on Halloween and its villain Mike Myers.

Still, the album does have some pieces that reflect Matt’s state of mind after the divorce, like in the song ‘Goodbye’, a ballad that the artist wrote for his wife, after their seven-year marriage came to an end. He recognized that “there was a fair amount of self-medication and intense isolation”, but he is happy to be able to get back on the right tracks.

The new collection has been getting mixed reviews from the critics, with Independent and Rolling Stone saying this is the best work of the band so far, while the website The Line of Best Fit says the album is a tasteless experience and an easily forgotten album. So far though, it holds a 75% rating on Metacritic.

This is the fifth studio album of the band and the successor of ‘Tell me I’m pretty’, from 2015, who brought successes such as “Cold Cold Cold” and “Trouble”. Other songs that became highly popular were “Cigarrete Daydreams” and “Come a Little Closer”, from “Melophobia” (2013), along with “Ain’t no rest for the wicked” and “Back against the wall”, included in their self-titled first album (2008).

Besides the vocalist Matt Shultz, the band is composed with his older brother Brad (guitar and keyboards), Jared Champion (drums), Daniel Tichenor (bass and backing vocals), Matthan Minster (piano and keyboards) and Nick Bockrath (guitar). Until 2013 Lincoln Parish was also a guitarist for the band, when he left to become a producer on his own.