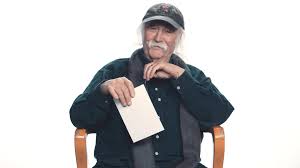 David Crosby might not seem like the obvious candidate for an advice columnist. After all, this is a man that has abused just about every drug in the world, alienated most of his former bandmates and spent time in a Texas prison. But we approached him to spearhead this column because he’s learned from the many mistakes of his past and is now full of hard-earned wisdom. He’s also recording some of the best music of his career, on a U.S. tour and the subject of Cameron Crowe’s documentary Remember My Name.

For the inaugural Ask Croz column, Rolling Stone Magazine had the chance to sit down with Crosby in person and ask him questions on video that he’d never seen in advance. His answers here were all delivered on the spot without an instant of forethought. The topics range from tips to surviving life in prison to dealing with infidelity, living with a partner that supports Donald Trump and competing with musicians for women. He never flinched at any question, no matter how outrageous or bizarre it was.