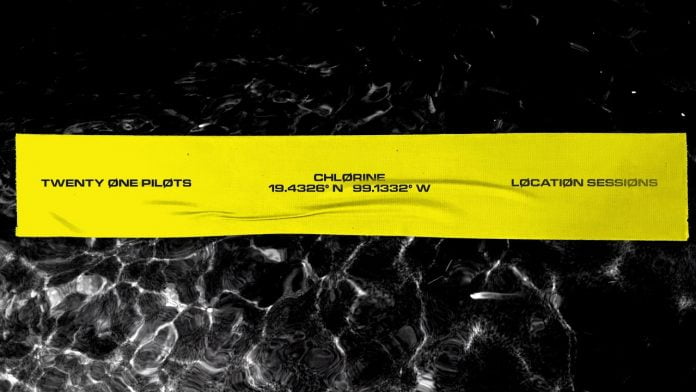 Twenty One Pilots have shared “Chlorine (19.4326° N, 99.1332° W),” the first track featured in the band’s new “Løcatiøn Sessiøns” series. Recorded by Tyler Joseph, “Chlorine (19.4326° N, 99.1332° W)” marks the first performance from the “Løcatiøn Sessiøns,” a series of stripped back performances. The track is accompanied by an official visualizer, which is streaming now on the band’s official YouTube channel.

“Chlorine” is featured on Twenty One Pilots’ acclaimed LP TRENCH, which made a stunning global impact upon release this past October. The RIAA gold certified collection earned the GRAMMY®Award winning duo of Tyler Joseph and Josh Dun their biggest sales week ever in the U.S., with 175,000 units sold in its first week. An extraordinary achievement for the Columbus, OH band who moved 135,000 copies of TRENCH in pure album sales without the aid of a ticket / album bundle for their worldwide headline “Bandito Tour.” TRENCH — with over 52 Million on-demand audio streams its first week — also marked the largest streaming week (debut or otherwise) in the U.S. for a rock album. A true global phenomenon amassing 110 Million streams worldwide in its first week, TRENCH earned Twenty One Pilots Top 5 chart debuts around the globe including the U.S., U.K., Belgium, Canada, Finland, Germany, Ireland, Italy, Norway, Scotland, and Sweden, with #1 debuts in Australia, New Zealand, and The Netherlands.

Twenty One Pilots’ TRENCH follows the Twenty One Pilots’ global breakout BLURRYFACE, which made a stunning chart debut upon its initial release, entering the SoundScan/Billboard 200 at #1. The album also achieved a milestone unrivaled in the digital era, becoming the first album in which every individual song on the album certified Gold, Platinum or multi-Platinum by the RIAA.

“Ride” was then followed by still another world-conquering hit single, “Heathens,” featured on Atlantic Records’ blockbuster SUICIDE SQUAD: THE ALBUM. The 6x RIAA platinum certified single – which received three GRAMMY® Award nominations including “Best Rock Performance” (Tyler Joseph, songwriter) – spent four consecutive weeks at #2 on the “Hot 100” while also topping Billboard’s “Hot Rock Songs” for a record-shattering 28 consecutive weeks and counting. The unprecedented one-two punch of “Ride” and “Heathens” made Billboard history, establishing Twenty One Pilots as only the third rock act with simultaneous top 5 “Hot 100” singles in the chart’s 58-year history, following only the Beatles and Elvis Presley.