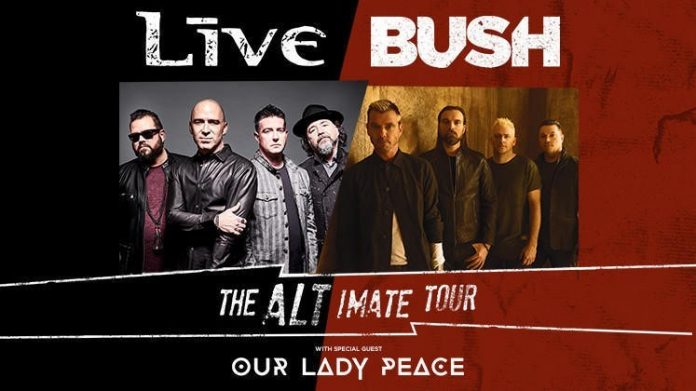 By popular demand, seminal rock bands +LIVE+ and BUSH are adding fall dates to their acclaimed ALT-IMATE Tour, which Billboard raved about as a night when the two bands “roar through the classics.” The high-powered co-headline run sees these two iconic acts celebrating the 25th anniversary of their respective landmark albums Throwing Copper and Sixteen Stone.

About the tour, Bush frontman Gavin Rossdale told Consequence of Sound, “I’ve known Live since back in the day and they’re great people. As far as what people can expect, it’s a thousand percent and lots of energy, a couple of new songs and a just a celebration of the summer. It’s good fun.”

“So thrilled that the ALT-IMATE Tour is extending into October! From the first concert with Bush and Our Lady Peace, we knew that this show was something special,” says +LIVE+ frontman Ed Kowalczyk. “The fans have been so supportive and are obviously sharing our excitement! See you on the road!”

Released in 1994 and fueled by blockbuster No. 1 singles “Lightning Crashes,” “Selling The Drama,” “Glycerine,” “Comedown” and “Machinehead,” breakthrough albums Throwing Copper and Sixteen Stone sold more than 20 million albums combined. Both were spotlighted on Rolling Stone’s list, “1994: The 40 Best Records From Mainstream Alternative’s Greatest Year,” and remain timeless favorites, thanks to radio staples that include “Everything Zen,” “Little Things,” “I Alone” and “All Over You.”

Two decades later, Bush has another radio hit on their hands with “Bullet Holes,” which is the end title track in the blockbuster film, “John Wick: Chapter 3 – Parabellum.” Click HERE to watch the Jesse Davey-directed companion video, which features a band performance interspersed with footage from the film. “Bullet Holes” was produced by Tyler Bates (John Wick 1 &2, Guardians of the Galaxy, Deadpool 2) and is the first single from Bush’s upcoming album, The Mind Plays Tricks On You.

Coming off a sold-out European tour, +LIVE+ returns to the U.S. with new single “Hold Me Up”–originally recorded for Throwing Copper. “Hold Me Up” is marching up the rock radio charts and is part of the band’s freshly released Throwing Copper 25th anniversary deluxe package (out now on Radioactive/MCA/UMe). +LIVE+ is also celebrating the anniversary of Throwing Copper with a toast of their first craft beer aptly named, “Throwing Copper Ale” which is on presale now HERE.