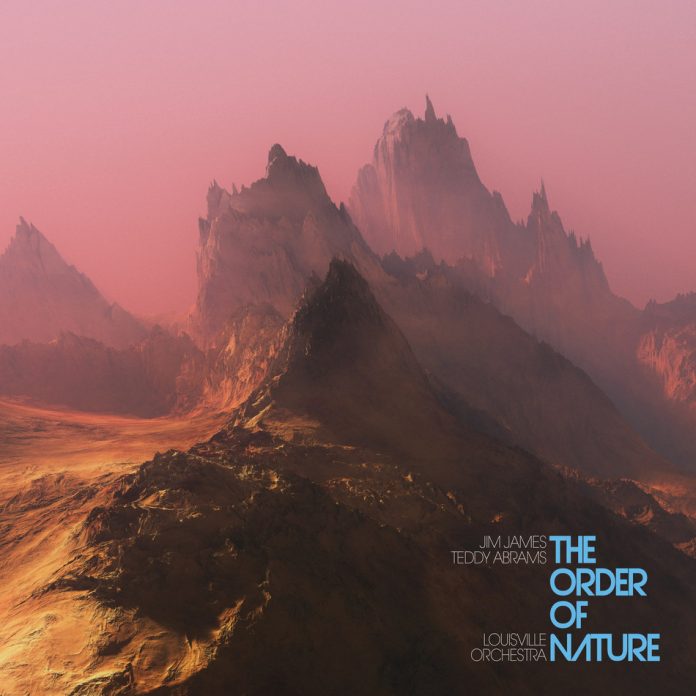 Jim James, acclaimed genre-bending solo artist, passionate social activist and leader of legendary rock band My Morning Jacket, and conductor/composer Teddy Abrams & The Louisville Orchestra announce the release of their collaborative project, The Order of Nature. As two of the world’s most vibrant and versatile musicians, neither James nor Abrams shies away from a challenge, and with The Order of Nature they’ve crafted a large-scale symphonic suite that has James’ evocative songs as its foundation. Abrams built a grand orchestral house on that foundation, and the result is an explosion of music that boldly synthesizes rock and classical while taking advantage of orchestral music’s inherently cinematic nature. Featuring unreleased new songs from James as well as re-imaginings from his solo catalog, the album will be released October 18 via Decca Gold.

Lyrically, James takes a deep dive into issues vitally important to him in recent years, including equality and intolerance, human connection and acceptance. Abrams uses repeating motifs to weave the songs into a seamless whole, with the goal of capturing the idea of nature in a cinematic way and turning James’ quiet demos into a majestic tapestry that conveys the album’s themes of politics, the natural order and the hopelessness of hatred. They all spin off of the suite’s central theme, which is James’ fascination with the absence of hate in nature. Animals kill each other, but only out of hunger, while humans daily choose hate —we ignore the order of nature and that choice is wreaking havoc.

“The core idea to me is trying to reflect on the fact that nature doesn’t know how to hate,” says James. “Humans are part of nature obviously, but why do we have this thing called hatred and how do we get rid of it? We’re fighting nature and thinking we can prevail over nature, but we’re killing each other and killing the planet.”

Abrams spent months building a complex symphonic work in which the songs could breathe, writing music that captures both the quiet drama of walking alone through a snowy landscape and the urgency of trying to steer a disrupted society toward kindness.

“We’re really looking at addressing things head on,” says Abrams. “That was an interest of mine in working with Jim because he has a way of taking on challenging and divisive issues and presenting them in ways that everybody can relate to, even if you’re from different political backgrounds.”

“For me it was very inspiring, and it was also inspiring to hear what Teddy wrote,” James added, “and I really enjoyed just giving him this seed of a song and just watching it flower.”

The Order of Nature debuted April 6-7, 2018 as part of the Louisville Orchestra’s annual Festival of American Music. The second night’s performance is what you hear on this album, recorded in one take, no overdubs.

James and Abrams also today announce a three-part mini-documentary on the making of The Order of Nature. The first chapter, “Collaboration,” is available now.

Most recently, the innovative tandem announced select performance dates that will feature local orchestras. Those dates will include the legendary Kennedy Center in Washington, DC on September 4, 2019, Benaroya Hall in Seattle, WA on May 12, 2020, and Boettcher Concert Hall in Denver, CO on May 15, 2020.

JIM JAMES, TEDDY ABRAMS AND THE LOUISVILLE ORCHESTRA – THE ORDER OF NATURE TRACKLISTING:
1. WALKING IN THE SNOW
2. HERE IN SPIRIT
3. THE HUMAN TOUCH
4. IN DEMAND
5. BACK TO THE END OF THE WORLD
6. WHO AM I?
7. OVER AND OVER
8. SET IT TO SONG
9. SAME OLD LIE