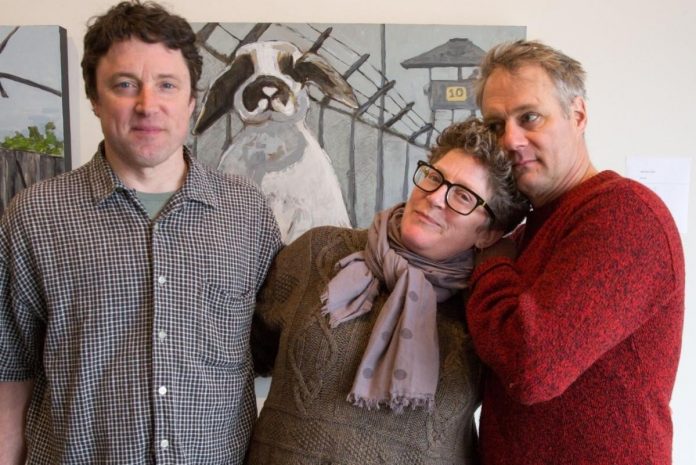 They are Beat Happening and this is the definitive document.

On November 29th, Domino will release We Are Beat Happening, a box set of the band’s entire recorded output: seven LPs that showcase how the band created an international network of underground pop entirely on their own terms. The albums have been newly remastered by Frank Arkwright at Abbey Road Studios, and this will be the first time the entire Beat Happening catalogue has been in print in over a decade.

The story of Beat Happening – Calvin Johnson, Heather Lewis and Bret Lunsford – began in Olympia, Washington at the dawn of the 1980s. After playing their first ever shows in Japan, the trio released five albums and four EPs throughout 1984 to 1992. Whilst they may have played their last show in 1992 and made their final recording in 2000, it’s tricky to define their cessation. Along with the music they made and the shows that they played, Beat Happening created a connectivity that is still completely present.

In the early days, Beat Happening were able to exist through the help of other bands lending them instruments and offering support; the three-piece reached out hands and sought connections wherever they went. Their shows in Japan came about through a fellow student at Olympia’s Evergreen State College. They shared an ethos and sonic aesthetic with the Glasgow scene of The Pastels and The Vaselines, and when their UK tour took them to Glasgow in 1988, they cemented that alliance.

Dischord’s Ian MacKaye and Johnson first met when Calvin was in high school. Several years later, they formed a friendship that connected the Washington, D.C. and Olympia scenes. Beat Happening’s tours with Fugazi were instructive on many levels, but particularly on the nature of punk rock. Beat Happening’s rebuttal of aggression as a core principle of punk was hard for many Fugazi fans to perceive, let alone swallow. Each show the two bands played together offered new iterations of fearlessness.

As their touring wound down in the early ‘90s, Beat Happening went on a memorable 1992 jaunt through the Pacific Northwest with Stuart Moxham (Young Marble Giants) and Bratmobile. The five shows presented a spectrum of idiosyncratic punk that ranged from its UK beginnings through to the emerging Riot Grrrl movement. Beat Happening made so much sense playing between those two acts. Their songs connected the dots between post-punk’s minimalism and Riot Grrrl’s destruction of the rulebook, illustrating why their unvarnished sound and singular song craft held sway over so much of ‘90’s indie music.

The legend of Beat Happening, and of K, the label that Calvin Johnson founded, is full of big names worked with before they were big (Beck, Modest Mouse, Gossip), and big names influenced (Kurt Cobain, Sleater-Kinney, REM—who covered “Indian Summer”). Beat Happening and K have also worked with the likes of Phil Elverum (Mount Eerie, The Microphones), Steve Fisk, Mark Lanegan and Conrad Uno.

And now, in 2019, Bret, Heather and Calvin all have families and careers. Bret and Calvin are in bands. Heather, who does all the artwork for the band, continues to make art. They are still the most faithful friends. But in as much as Beat Happening was never like other bands, why should the extent of their existence be defined by normal criterion? We are Beat Happening. Note the verb tense.

The We Are Beat Happening box set includes six albums over seven LPs, with a brand-new 36-page booklet housed in a hard-outer box. The booklet, written by Lois Maffeo, also features rare & unseen pictures & paintings from the band.