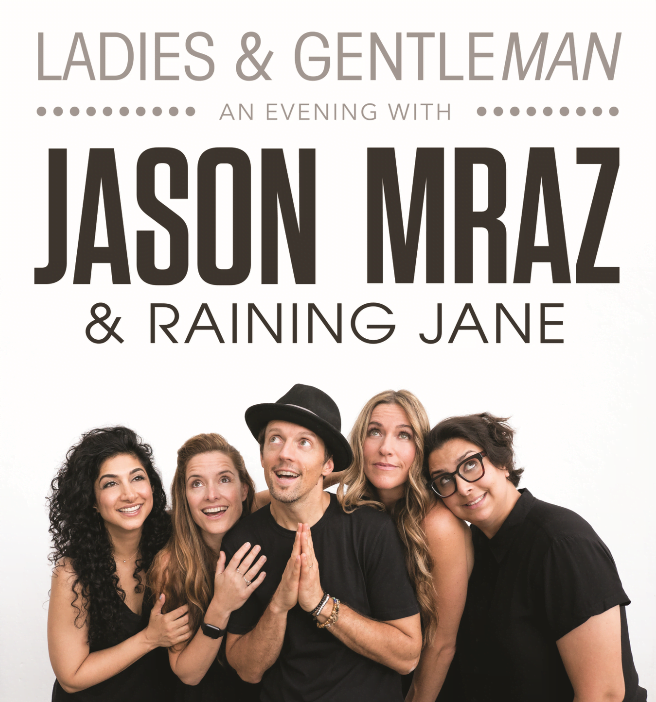 Multi-platinum singer/songwriter Jason Mraz has announced plans for a very special North American tour, set to kick off this fall. The multiple Grammy award-winner will be joined by longtime collaborators Raining Jane for the run, dubbed “Ladies & Gentleman, An Evening with Jason Mraz & Raining Jane.” Set to kick off on October 23rd in Modesto, CA, the tour finds Mraz bringing his exuberant live show to theaters and performing arts centers, wrapping with a two night stand at the Chicago Theatre on November 23rd + 24th.

Mraz recently wrapped his global “GOOD VIBES” tour, with stops at arenas and outdoor pavilions throughout North America, Europe, and Asia. “I am thrilled to be returning to intimate venues with Raining Jane,” Mraz explained. “I love the sounds and stories we make as a 5 piece.” Raining Jane echoed these sentiments: “YES! You KNOW we are fired up to play some intimate shows around the US. Excited to share some new tunes we’ve been working on together, and our interpretations of Mraz classics!”

In addition to familiar favorites, “Ladies & Gentleman” will feature new material, including songs from Know. – Mraz’s sixth studio album, released in August 2018. The album became his fifth consecutive studio album to debut in the Top 10 of the Billboard 200 and has gone on to amass hundreds of millions of streams, led by the inspiring single “Have It All.”

This past weekend, Mraz hosted the annual LIVE ART event in Richmond, Virginia. Presented by the School of the Performing Arts in the Richmond Community (of which Mraz is an alum), the evening features performances from local youth and benefits SPARC’s mission as an inclusive arts education organization.

Next weekend, Mraz will team up with Cleveland’s Contemporary Youth Orchestra for a sold-out two-night stand at Severance Hall (June 8th + 9th). With a second night added by popular demand, the shows will feature hits and fan favorites backed by the 115-piece Contemporary Youth Orchestra, led by Music Director Liza Grossman, and will mark Mraz’s very first full-length performance with a live orchestra.