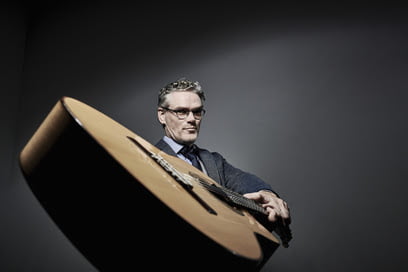 Jesse Cook—the internationally acclaimed guitarist, composer and producer—has announced his fall tour will extend through January 2020 with the addition of 15 shows including stops in Nashville, TN, Atlanta, GA, Charlotte, NC, and Orlando, FL, in addition to others. Cook is about to follow the road across America as his now 48-date “Follow The Road” U.S. tour kicks off tonight in Pittsburgh, PA at the Byham Theatre. The headlining trek will take Cook and his vibrant band across the country with stops in Cleveland, OH, Boston, MA, Philadelphia, PA, New York, NY, Denver, CO, San Diego, CA, Las Vegas, NV, Los Angeles, CA and Sacramento, CA, among many others. For more information and to purchase tickets, click here.
Next year, Cook will be celebrating the 25th anniversary of his debut album, Tempest (1995, Narada). The JUNO Award-winning musician shows no signs of slowing down, but rather expanding on his musical appetite. Cook’s latest record, Beyond Borders (2017, eOne Music), explores a sonic landscape unfettered by geography, ethnicity and musical styles to forge a unique world music hybrid. Beyond Borders is the most sonically diverse and distinctive disc in his vast and varied catalog, which has earned him 11 JUNO nominations and one JUNO win in the Best Instrumental Album category for Free Fall (2000, Narada) – which has its 20-year anniversary in 2020.
Fans can check their local PBS station listings to watch an airing of Cook’s special, “Beyond Borders.” Directed, edited and mixed by Cook himself, the special captures footage from his 2017/2018 “Beyond Borders” tour and specifically highlights a different song from each night of the tour. Click here to watch the special’s trailer.
Catch Jesse Cook on his “Follow The Road” tour: