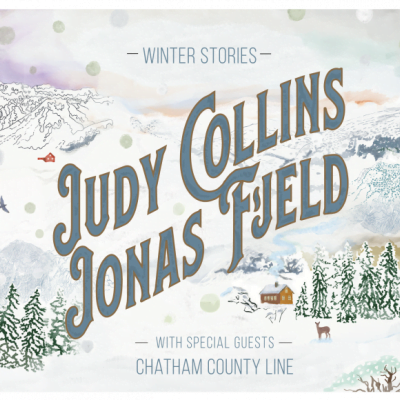 Winter Stories is a collection of originals, new collaborations and classics including Collins evergreens “Mountain Girl,” a re-recording of Jonas’s poignant “Angels In The Snow,” and a rendition of Joni Mitchell’s “The River.” “The Blizzard” was originally written as a 7-minute opus, but later truncated for the album on which it appeared. On Winter Stories, fans can finally hear it recorded in its full majesty. The artists also cherry-picked songs they’ve longed to record throughout the years, including Jimmy Webb’s “The Highwaymen,” which Collins has performed live with Stephen Stills, and Stan Rodger’s “North West Passage.” For the sessions, Jonas contributed the newly-penned “Frozen North,” and the stunning title track which features the masterful vocal interlace of Collins and Fjeld. ﻿

Jonas Fjeld is a beloved Norwegian artist, known internationally for his trio Danko/Fjeld/Andersen, featuring The Band’s Rick Danko. Chatham County Line has been a staple of the North Carolina music scene for nearly two decades.

Winter Stories came together in February 2019, when Collins, Fjeld, and Chatham County Line headed to Echo Mountain Studios—a former stately church—in Asheville, North Carolina. Prior to this, the three artists had never officially worked together. They had three days of rehearsal and pre-production in which they picked the album’s core songs from a list of 20 potential seasonally-themed tunes.

Reflecting on the sessions, Collins says: “I was very honored to work with this all-star group—there was definitely a lot of love and admiration between everyone, and we had such a great time together.” She adds, “I knew Jonas and Chatham County Line would be a great fit with me. The language of music overarches everything, including geography. When we came together in the studio, we found we could speak to each other in a way that was compatible and nuanced.”

In the past four years, Collins has released three albums and a tremendous amount of accolades. 2016’s Silver Skies Blue, a duets record with Ari Hest, was nominated for a GRAMMY Award, and led to a performance at the GRAMMY Premiere Ceremony. In 2017, she released Everybody Knows, her first album with Stephen Stills celebrating an important decades-long friendship that led to a year of touring, a profile on CBS Sunday Morning and more.