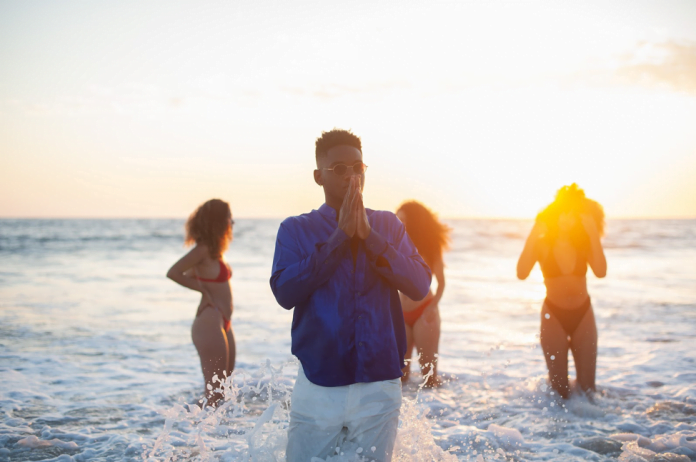 Taking inspiration from the track’s title, the video was shot in Los Angeles and features all the aspirational hallmarks of a Californian lifestyle. From the sunset strip to the ocean, the ease of sunny LA provides the perfect backdrop for an upbeat track about a mental release.

Directed by Elliot Clancy Osberg (Anders, Roy Woods, Langston Francis) the video showcases Lavi$h’s infectious positive energy, he tells us “the song had a certain energy that was important to capture.”

In Lavi$h’s words: “Sunset Blvd starts energetically and continues to build. We wanted to capture the pace of the track visually and filming in California was the only way that made sense. The scenes are spliced together rapidly, day/night, beach/canyon, it’s all part dream part reality. Capturing the feeling of being in a place where the possibilities are endless.”

Produced by Milano, Sunset Blvd is an upbeat track with bounce that effortlessly blends staples of hip-hop, rnb and pop. An introduction to his range of talent, Lavi$h is an artist on the verge of global success. Lavi$h is currently working on his second single due out later this year. Additional details to be announced at a later date.

Lavi$h’s sound blurs the lines between hip-hop, r&b & pop music, creating a unique rhythmic fusion which he’s become known for. A young rapper/singer/songwriter, Lavi$h, is one of the most exciting talents to emerge from his class.

Recently relocating to Toronto, Lavi$h was born in Lusaka, Zambia and raised in Winnipeg, Manitoba. He began recording & songwriting throughout his school years and after gaining some initial traction within local circles, Lavi$h began to really hone in on his sound & developing his craft. After a few singles and a joint album with Kingsley (Sweeter Life), Lavi$h had begun building a loyal fanbase locally in earnest.

In 2017, Lavi$h brought on a team of producers & management to further accelerate his career. With the release of his Sweeter Life mixtape, a slew of live shows & festival performances, Lavi$h emerged as one of Winnipeg’s most promising talents. Continuing to release music – Lavi$h’s growing popularity allowed him to share stages with artists like Bhad Bhabie and 88 Glam. In Oct. of 2018, Lavi$h partnered with RIFF for a headline show in Winnipeg which amassed an audience of 400+, leaving fans with an unforgettable experience. This show was the last major local performance for Lavi$h prior to relocating to a bigger market, in Toronto.
Independently releasing a number of singles this year, including “Savage” and “G.O.M.F.” – Lavi$h has been working hard to create new opportunities for himself. A young man whose career is on the rise, Lavi$h recently signed to Public Records Inc/Universal Music Canada to release his next singles. With his first Public Records powered single coming out in September 2019, the excitement is growing for this truly global talent.