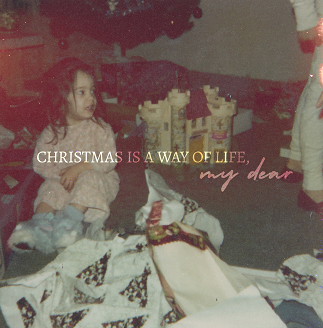 Chantal Kreviazuk – one of Canada’s most recognizable voices – has announced the release of her first Christmas album, the 10-track “Christmas Is A Way Of Life, My Dear,” due out November 15. The title track as well as a jubilant cover of the classic “Walking In A Winter Wonderland” are available at all digital retailers and streaming services today. The album features five brand new original songs, plus Chantal’s spin on classics such as “Silent Night,” “Blue Christmas” (a duet with husband Raine Maida, AKA MOON VS SUN) and “Wonderful Christmas Time” (featuring the debut of son Sal Maida).

“The world could use the Christmas spirit all year long,” says Chantal Kreviazuk. “The kindness, gentleness and thoughtfulness that goes with the season is so healthy. The world could benefit from living by the values that radiate during Christmas.”

Along with the album, Chantal will be touring across the country for holiday shows, beginning November 23 in Edmonton. A full list of dates can be found below.

Chantal has spent the last year touring in support of her collaborative project with husband Raine Maida, MOON VS SUN. Elvis Presley’s “Blue Christmas” has always been a favourite for the family during the holidays so choosing a song to perform together was easy. “We both grew up in households that listened to a lot of Elvis,” says Chantal. “We are inspired by his ever-present vocal harmonies.”

Sal Maida, Raine and Chantal’s 11-year-old son, joins his mother on Paul McCartney’s iconic “Wonderful Christmas Time” and a brand new song, “The Christmas Train.” “Sal joining me for ‘Wonderful Christmas Time’ was so natural. The kids are in and out of the studio all the time so he was in one day singing along with his high harmonies and I said, ‘oh you must record that!’ Sal loves Christmas so much, he wishes for Christmas in the summer, so this year his wish came true! We decorated the studio with Christmas trees and snow shakers.”

The experience of recording with Sal was so gratifying, Chantal wrote him an entire song, “The Christmas Train.” “Now Sal has a full solo on the album all to himself. He was quite a natural in the vocal booth, it was adorable.”

Chantal Kreviazuk is a platinum-selling, three-time Juno Award-winning artist from Winnipeg. In 2016, she returned with her sixth album “Hard Sail” after a nearly seven-year break from recorded music. During that time, she was focused on raising her three sons with husband Raine Maida, as well as her other musical passion, crafting songs. Chantal has written for Drake, Pitbull, Kendrick Lamar, Britney Spears, Christina Aguilera and Josh Groban and countless others.

In 2014, Chantal and Raine became members of the Order of Canada, recognizing their efforts to raise awareness and support for numerous causes including human and animal rights, mental health, education and the environment. Chantal has been an ambassador to War Child for nearly two decades and one of the organization’s founding artists. Raine and Chantal released their first collaborative album together as MOON VS SUN, “I’m Going to Break Your Heart,” as well as an accompanying documentary, earlier this year.