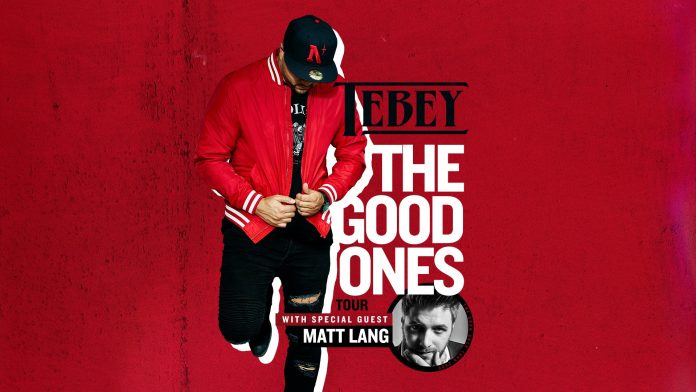 Canadian producer, hit singer-songwriter and 2019 CCMA Album of The Year nominee, Tebey announced The Good Ones tour, kicking off in Kamloops on January 15th, 2020 and wrapping on February 8, 2020 in Montreal, QC. The pre-sale commences October 1st with an on-sale date of October 4th.

The 20-date tour will be Tebey’s first Canadian headlining tour, showcasing his hit songs including “Denim On Denim,” and “Who’s Gonna Love You”, his biggest hits to date achieving Gold status and 7 million streams and 5 million streams respectively. Tebey’s current single “Good Jeans” recently nabbed the #2 spot on the country radio charts and Tebey has garnered 7 No. 1 songs as a writer (including a Billboard #1 song with “Somebody Else Will” performed by country star Justin Moore) in multiple countries along with a No. 1, three top 5’s, two top 10’s and four top 20 hits as an artist.

“My first-ever headline tour has definitely been a long time coming,” Tebey says. Everyone’s path to success is different, and mine has been a long and winding road filled with #1 single highs and surprising lows. Since 2014 my team and I have gradually built a catalog of hit songs and have watched the fan base grow with it. But only now are we finally getting to see my name at the top of the marquee.”

“I’d be lying if I said I wasn’t nervous. As a headliner the onus is on you to sell the tickets. And we’re going into some big venues on this tour like The Commodore in Vancouver, which is 1,000+. It’s a lot of pressure, but it’s also time to take this exciting step.”

Joining Tebey for the second part of the tour is rising star Matt Lang who recently won the coveted 2019 SIRIUSXM Top of the Country contest. The Quebéc native’s debut national single “Water Down The Whiskey” was the most added song at all Canadian radio formats during its first week of release, a promising start for the songwriter and powerful performer as he brings his music into the English market. His debut single, “Love Me Some You”, has over 1.6 million Spotify streams and 2.7 million all-time streams, kickstarting his Canadian country music career in English Canada.

Joining the tour in Kamloops and Vancouver is choir girl turned country troubadour, Kristin Carter. Born and raised in White Rock, BC, Carter grew up with the modern country vibes of Shania Twain, The Dixie Chicks, and Faith Hill in addition to taking cues from the soulful vocals of Beyoncé. With a country sound infused by pop sensibilities and punctuated by powerhouse vocals and lyrics that inspire confidence, Carter’s country music journey has only just begun. Recently signed to Country superstar, Dallas Smith’s SteelHead Music, Kristin Carter will release her debut single, “Karma” in October.

Tebey’s hot new single “The Good Ones”, was released last week via Jayward Artist Group/The Orchard and features Quebec pop superstar Marie Mai. The song hit top ten on the all genre Apple Music single chart in the first days of release and was added to Spotify’s Wild Country and New Boots playlists among others.
Visit www.tebeyofficial.com for additional information and to purchase tickets.