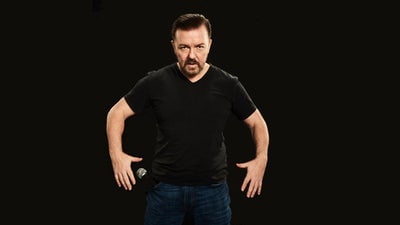 Last week on The Late Show with Stephen Colbert, Ricky Gervais announced he would once again be touring the United States in 2020 with his new live show SuperNature. ‘SuperNature’ follows Gervais’ 2017 ‘Humanity’ tour, which was the comedian’s first world tour in over seven years. ‘Humanity’ sold out top venues, received worldwide acclaim, and was recorded for a Netflix special.

Tickets to SuperNature in Chicago, Los Angeles, and New York City go on sale this Friday, July 26 at 10am local time.

Considered the most influential British comedian since Charlie Chaplin, Ricky Gervais is an award-winning stand-up comedian, with five international tours to date. His live stand up show ‘Fame’ became the fastest selling UK stand-up show in history. Gervais can most recently be seen in the dark comedy “After Life,” which he created, directs, stars in and executive produced. The series premiered Friday, March 8th worldwide on Netflix. It was recently announced that the series will return for a second season in 2020.

All the dates are here.