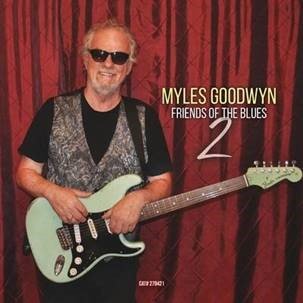 Legendary Canadian guitarist, bandleader and songwriter Myles Goodwyn is returning to his first love – the blues – with the second recording of Myles Goodwyn and Friends Of The Blues, the follow-up to his JUNO nominated and East Coast Music Award winning blues debut.

Friends Of The Blues 2 has 13 original songs written by Goodwyn and a cover of “All Over Now” by Bobby Womack. As with Friends Of The Blues 1, the album features a supporting cast of the “who’s who” on the Canadian blues music scene, including Jack de Keyzer, Kenny “Blues Boss” Wayne, Warren Robert, Ross Billard, Bruce Dixon, JR Smith, Matt Andersen, Mike “Shrimp Daddy” Reid, Jack Semple, Sherman “Tank” Doucette, Joe Murphy, Bill Stevenson, Will Van Hansolo, Steve Segal and more. A real feature on Blues 2 is a stunning duet with six-time winner of Female Vocalist of the Year at the Maple Blues Awards, Angel Forrest.

Goodwyn grew up poor and is the classic “small-town kid makes good” success story. As a young teenager Goodwyn honed his skills playing in cover bands and began writing original material as soon as he could play the guitar. One of April Wine`s biggest hits, “You Won’t Dance With Me”, was written when he was a teenager.

Myles Goodwyn’s voice is as distinctive and immediately recognizable as his songwriting skills are prolific. Myles and the other members of April Wine were inducted into the Canadian Music Hall Of Fame in 2010. Goodwyn received the prestigious East Coast Music Lifetime Achievement Award in 2008 and the SOCAN National Achievement Award in 2002. In 2016 he released his memoir named, Just Between You and Me, which became an instant seller on the Globe and Mail`s Non-Fiction List. His second book, Elvis and Tiger – this time fiction was published in 2018 and was well received.

Not a bad start to a blues career and his first blues recording effort at age 70 or at any age.
Goodwyn was committed to making his follow up recording, Myles Goodwyn and Friends Of The Blues 2, using the same logic as his blues debut release; “I wanted to write some good blues tunes and sing these tunes as best that I could. I really appreciate great blues material because it is timeless, it is vital and its passionate, even heartbreakingly so”, says Goodwyn. His decision to use only “real blues players” was again, deliberate; “I wanted the real deal when it came to the performances.”

The result of these collaborations is testament to the care that went into Myles Goodwyn and Friends Of The Blues 2 will surely show, yet again, that Myles Goodwyn is not only a gifted blues singer/songwriter and musician, but also a real blues man at heart.

Myles Goodwyn and Friends Of The Blues 2 Track List