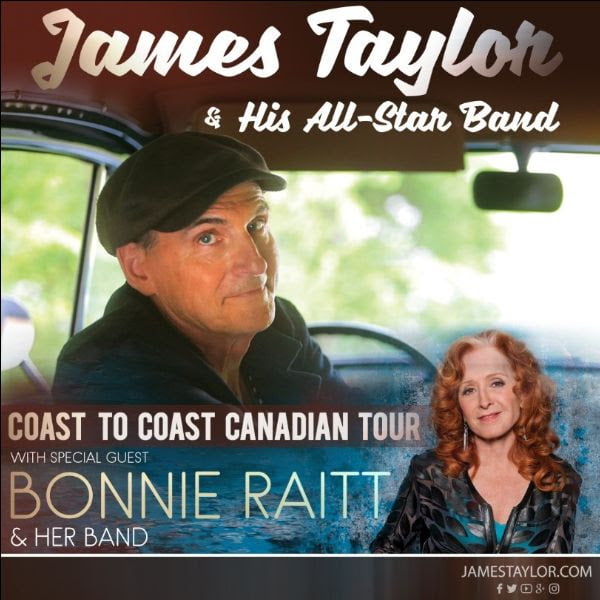 James Taylor & His All-Star Band with special guest Bonnie Raitt and her band have announced a Coast to Coast Canadian Tour. The tour kicks off in Victoria, British Columbia on April 14, 2020 and includes 12 stops across the country ending in St. John’s, Newfoundland on May 5, 2020.

Taylor and Raitt’s highly anticipated Coast to Coast Canadian Tour celebrates a decades-long friendship. Recent performances in the US have earned rave reviews. The Minneapolis Star Tribune called the show “an unforgettable evening.”

As a recording and touring artist, James Taylor has touched people with his warm baritone voice and distinctive style of guitar-playing for more than 40 years, while setting a precedent to which countless young musicians have aspired. Over the course of his celebrated songwriting and performing career, Taylor has sold more than 100 million albums, earning gold, platinum, and multi-platinum awards for classics ranging from “Sweet Baby James” in 1970 to “October Road” in 2002. In 2015, Taylor released Before This World, his first new studio album in thirteen years, which earned him his first ever #1 album. Taylor has won multiple Grammy awards and has been inducted into both the Rock and Roll Hall of Fame and the prestigious Songwriters Hall of Fame. In 2012, Taylor was awarded the distinguished Chevalier of the Order of Arts and Letters by the French government and the National Medal of Arts by President Barack Obama in a White House ceremony. In November 2015, Taylor was presented with the Presidential Medal of Freedom, the nation’s highest civilian honor. In December 2016 Taylor received the Kennedy Center Honors, which are presented annually to individuals who have enriched American culture by distinguished achievement in the performing arts.

Taylor will also be releasing a one-of-a-kind music and storytelling experience entitled, Break Shot in early 2020 on Audible. Break Shot is Taylor’s first-ever spoken-word performance. Break Shot is a deeply personal and authentic audio-only memoir featuring personal reflections on his childhood, family life and early days of his career. Music and songs will be woven throughout.

Bonnie Raitt is more than just a best-selling artist, respected guitarist, expressive singer, and accomplished songwriter, she has become an institution in American music. Born to a musical family, the ten-time Grammy winner, who Rolling Stone named as both one of the “100 Greatest Singers of All Time” and one of the “100 Greatest Guitarists of All Time,” was inducted into the Rock and Roll Hall of Fame in 2000. After 20 years as a cult favorite, she broke through to the top in the early 90s with her GRAMMY-award winning albums, Nick of Time and Luck of the Draw, which featured hits such as, “Something To Talk About” and “I Can’t Make You Love Me.” Bonnie Raitt recently released her new album entitled, Dig In Deep. This release includes songs that continue to personify what it means for her to stay creative, adventurous and daring as she has over the course of a legendary career.