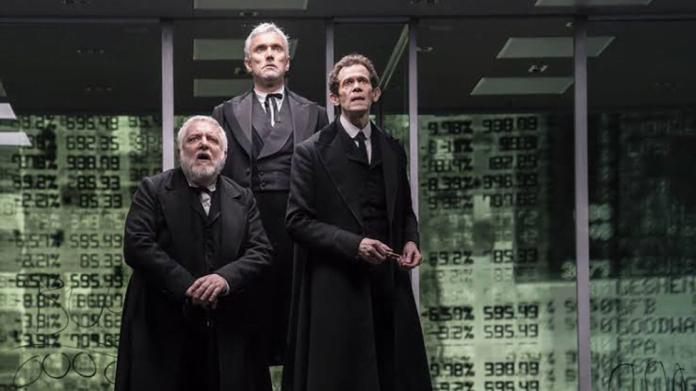 It’s the epic history of three Jewish brothers who brought the corporate world to its knees. The Lehman Trilogy creates the standard by telling their story in the best way possible. A musical that is a fabrication of Italian writer Stefano Massini directed by an Englishman Sam Mendes and yet a story typically American. Currently playing at Nederlander Theatre in New York, this musical is surely a must-see.

This is your chance to make an already fantastic experience sensational by reducing the cost to its minimum with Lehman Trilogy broadway tickets. This fantastic three-person musical came to Broadway after a total sold-out session at the National Theatre, the Park Avenue Armory, and London’s West End. The New York Times calls it “a ticket worth cashing in your gilt-edged securities for” and The Wall Street Journal says, “You should crawl across broken glass to see it.”

Know Before You Go

A direction of numerous award-winner Sam Mendes, The Lehman Trilogy charts the corporate life of three Jewish brothers as they arrive in America searching for a new life. The story covers it all in a 2 hour and 30-minute production. From a general store in a neighborhood to a well-established firm and its collapse. Lehman Brother’s Firm ruin caused an uproar in the financial sector of the American economy. The biggest financial crisis ever in the history of America.

Their journey through it all is covered by three cast members only. The cast includes Simon Russell Beale as the eldest Lehman brother ‘Henry’, Ben Miles playing second brother ‘Emanuel’ and Adam Godley as Mayer Lehman. As The New York Post suggests, “You dare not miss it” you better “Do anything you can to get a ticket.”

The Lehman Trilogy: An Intense Bravado

The story takes place in New York in the mid-19th century. Where three Orthodox Jews arrive looking for life for themselves. The two brothers settled in the neighborhood whereas the eldest moved to the south, to Montgomery, Ala. He opens a general store benefiting from the Jewish Sabbath. Where his store was closed on Friday and Saturday evenings and open on Sunday all day. Bringing in floods of customers that were there for religious or other reasons.  Later the other two brothers join in and start selling raw materials to grow cotton and then the crop itself. There was practically nothing they didn’t do. From trading coffee and oil, finance railroads and airlines, to pushing into film production. They produced films like “King Kong” and “Gone with the Wind”.

The production doesn’t stray from the story much but it rather not delve into the Lehman brothers firm’s demise. Which resulted in a full-blown financial outrage in America. It is mostly credited to the bank’s decision to pull all strings to focus solely on financial mechanisms. However, the staging of the three-men cast was the highlight of the show.

In an instance, Beale turns into a depressing teacher instructing none-other-than the future senator and governor of New York. The scene is hysteric without contrast, a pure comedic highlight in the musical. Then in one scene Adam Godley sucking the life out of the dance as Bobbie Lehman had the audience breaking into a big round of applause.

The play though seems rushed at times doesn’t fail to deliver the emotional weight of the story. The writing is lyrical and direction outstanding. But what makes it an all-time success is its trio of actors who are almost never vague in their precision. They are well deserving of their collective nominee of the Olivier Award for Best Actor.