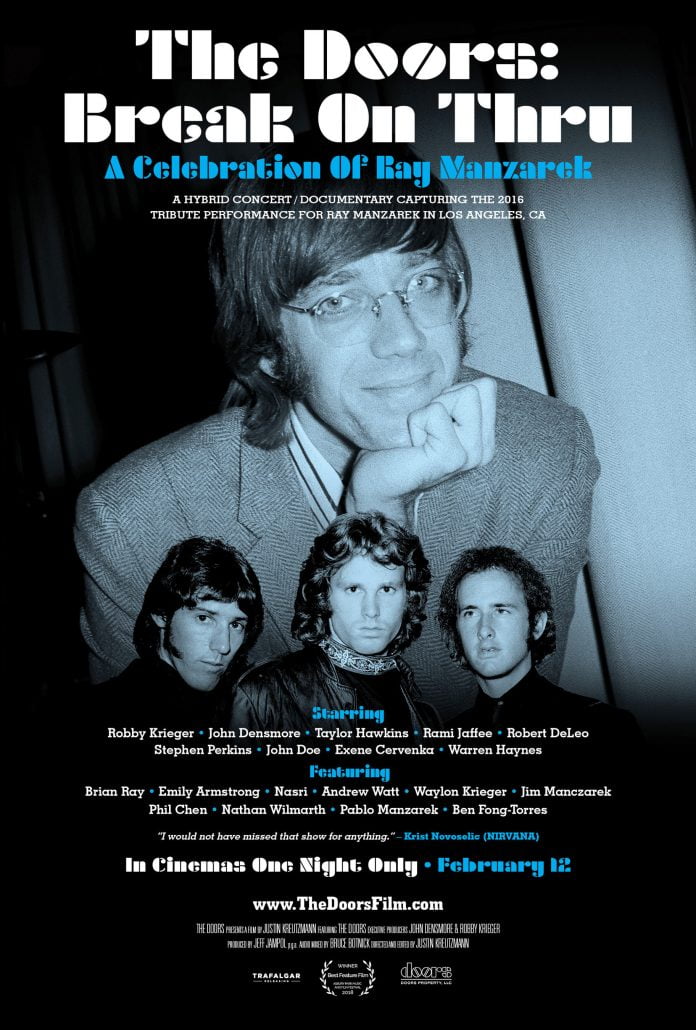 The Doors and Trafalgar Releasing today announced the upcoming release of The Doors: Break on Thru – A Celebration of Ray Manzarek, coming to cinemas worldwide for a one-night only event on February 12, 2020. The film will bring fans together in theaters to celebrate the extraordinary legacy of the late Ray Manzarek, co-founder and keyboardist of The Doors, on what would have been his birthday.

With a set list of Doors classics and compelling behind the scenes interviews and footage, this film celebrates the longevity of The Doors, bringing multiple generations together to celebrate this iconic band. Proceeds from the LA concert were donated to Stand Up for Cancer as selected by Ray Manzarek.

Participating theaters and tickets can be found at www.TheDoorsFilm.com.

John Densmore, drummer of The Doors, shared: “It was such an honor to play with these world-class musicians in a tribute to our magical keyboard player.”

Kymberli Frueh, SVP Programming & Content Acquisitions at Trafalgar Releasing has said on the news: “Break On Thru is a true celebration of Doors co-founder Ray Manzarek and includes a whole host of musicians inspired by him including Taylor Hawkins of the Foo Fighters and Robert DeLeo from Stone Temple Pilots. Trafalgar Releasing are pleased to present the first ever global fan cinema gathering sanctioned by The Doors to celebrate Manzarek’s incredible legacy.”

2019 has been strong for music releases from Trafalgar Releasing in cinema. Coming up next is GORILLAZ: REJECT FALSE ICONS. Recent successes have included Depeche Mode: SPIRITS in the Forest directed by Anton Corbijn, Shakira in Concert: El Dorado World Tour, Metallica and San Francisco Symphony: S&M², which became the biggest ever rock music event in cinemas globally, BRING THE SOUL: THE MOVIE, which became the single largest event cinema release globally, Grateful Dead’s 9th Annual Meet-Up at the Movies, Tribeca documentary Between Me and My Mind about Phish frontman Trey Anastasio, Roger Waters  Us + Them, Slayer: The Repentless Killogy, Rush Cinema Strangiato 2019 and The Cure: Anniversary 1978-2018 Live in Hyde Park London.

The London based outfit have previously released films including Coldplay: A Head Full of Dreams, The Music Center presents Joni 75: A Birthday Celebration, Khalid Free Spirit, One More Time with Feeling, among others.

With an intoxicating, genre-blending sound, provocative and uncompromising songs, and the mesmerizing power of singer Jim Morrison’s poetry and presence, The Doors had a transformative impact not only on popular music but also on popular culture.

The Doors’ arrival on the rock scene in 1967 marked not only the start of a string of hit singles and albums that would become stone classics, but also of something much bigger – a new and deeper relationship between creators and audience. Refusing to be mere entertainers, the Los Angeles quartet relentlessly challenged, confronted and inspired their fans, leaping headfirst into the heart of darkness while other bands warbled about peace and love. Though they’ve had scores of imitators, there’s never been another band quite like them. And 50 years after their debut album, The Doors’ music and legacy are more influential than ever before.

The Doors were inducted into the Rock & Roll Hall Of Fame in 1993.