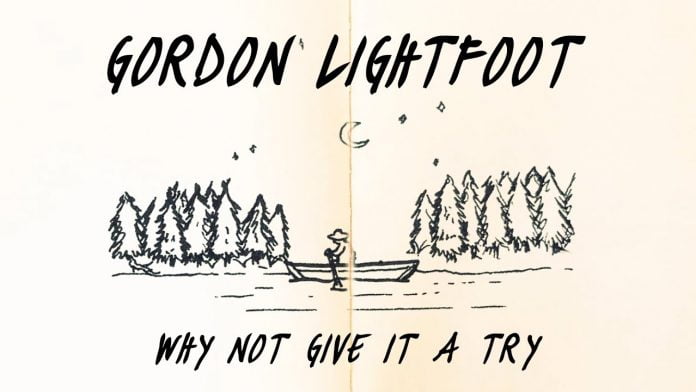 Legendary singer-songwriter Gordon Lightfoot has released a new song from his upcoming album SOLO. “Why Not Give it a Try” follows up on the release of “Oh So Sweet,” his first release of new music since 2004’s HARMONY. The new song features Lightfoot singing profound lyrics that touch on love, trying new things and remaining true to oneself. Accompanying the new track is a beautiful lyric video that highlights the songwriter’s powerful words and his prolific career.

Gordon Lightfoot is Canada’s greatest singer-songwriter. He was a genre-defining figure in the folk-pop scene of the 1960s and 1970s. He has been awarded the Governor General’s Performing Arts Award, Canada’s highest honour in the performing arts, as well as being named a Companion of the Order of Canada. His songs are indelible to the Canadian music landscape, and include such national treasures as “Sundown,” “The Wreck of the Edmund Fitzgerald” and “If You Could Read My Mind.” Lightfoot has been inducted into the Songwriters Hall of Fame, the Canadian Music Industry Hall of Fame, the Canadian Songwriters Hall of Fame, as well as Canada’s Walk of Fame. His songs have been recorded by the likes of Elvis Presley, Neil Young, Bob Dylan, Barbra Streisand, Eric Clapton and The Tragically Hip. For all the latest on Gordon Lightfoot, including upcoming tour dates follow him on Twitter, Facebook or his official website.