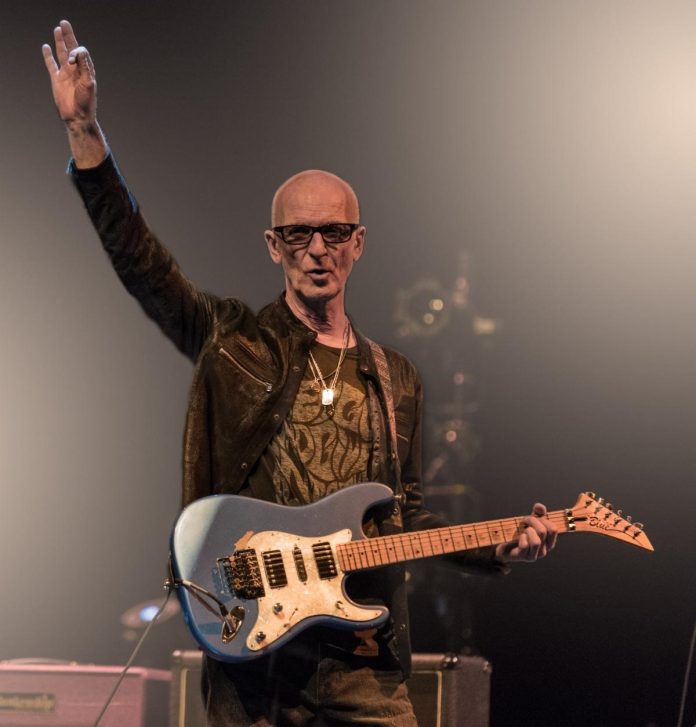 The Canadian Songwriters Hall of Fame (CSHF) has partnered with North America’s leading entertainment festival and conference, Canadian Music Week (CMW), to celebrate the induction of rock legend, songwriter, and broadcaster Kim Mitchell to the Canadian Songwriters Hall of Fame. Mitchell will be honoured during a special presentation by CSHF, and joined by friend and musician Ed Robertson of Barenaked Ladies to perform on stage.

The induction will take place as part of CMW’s Canadian Music & Broadcast Industry Awards on Thursday, May 21 at the Bluma Appel Theatre in Toronto. CMW recently announced its first slate of special awards recipients including Buffy Sainte-Marie who will receive the Allan Slaight Humanitarian Spirit Award, Debra Rathwell to the Canadian Music Industry Hall of Fame, along with Erin Davis & Nevin Grant into the Broadcast Hall of Fame.

Mitchell, through leading Max Webster, defined ‘alternative’ and ‘indie’ long before the words became clichés. He’s achieved critical acclaim and multi-platinum commercial success over a storied career spanning five decades, and is among Canada’s most respected singers, songwriters and guitar players. In addition to being the frontman, guitarist, and lead writer with his writing partner Pye Dubois of the influential and eclectic band Max Webster, he rose from there to prominence and massive Canadian success as an award-winning solo artist.

He is credited with penning (in partnership with Pye Dubois) and recording numerous classic hits including “Go For Soda”, “Rock N Roll Duty”, “Patio Lanterns”, “I am a Wild Party”, All We Are”, and “Easy To Tame” – all which have become part of the Canadian musical genome. Mitchell received the JUNO Award on three separate occasions including for Male Artist of the Year (1990) and Album of the Year (Shakin’ Like A Human Being, 1987); and recognized with numerous SOCAN Awards. With his band Max Webster, he released five albums which generated many Canadian top 100 hits including “Let Go the Line,” “A Million Vacations,” and “Paradise Skies.”

In the early 2000’s while maintaining a busy touring schedule, Mitchell was invited to join the on-air staff at the CORUS flagship station Q107 in Toronto. He left Q107 in 2014 but not before he had become one of the most popular and most listened to afternoon drive DJs in the country.

Mitchell went back to the recording studio in 2018 to mark his first solo recording in half a dozen years. He got together with his friends the Barenaked Ladies to re-record his song, the Max Webster hit “Diamonds Diamonds”. Max Webster and this song in particular was a great influence on the members of the Barenaked Ladies. The track and video were released in 2019 through Anthem Entertainment (formerly Ole Label Group). Mitchell has just finished up his 15th studio recording, The Big Fantasize. The full new studio recording produced by friend and Grammy Award-winning producer, Greg Wells (Keith Urban, Adele, Twenty One Pilots), will be released soon.

Today, Mitchell and his band of accomplished musicians tour the country selling out theatres, casinos and festivals coast to coast. His fanbase, which continues to grow is comprised of newer fans in their late teens and early twenties through to fans that have been following him since the late ‘70s, will attest that being at one of Kim Mitchell’s concert is like being at a live recording of a greatest hits box set.

Following Kim Mitchell’s induction presentation at Canadian Music Week, the Canadian Songwriters Hall of Fame will recognize his songwriting accomplishments in the National Music Centre, located at Studio Bell, in Calgary. The National Music Centre is the physical home of the Canadian Songwriters Hall of Fame and will continue to honour and preserve the legacy of new inductees through exhibitions which feature stories, exclusive artifacts, and one-of-a-kind memorabilia.