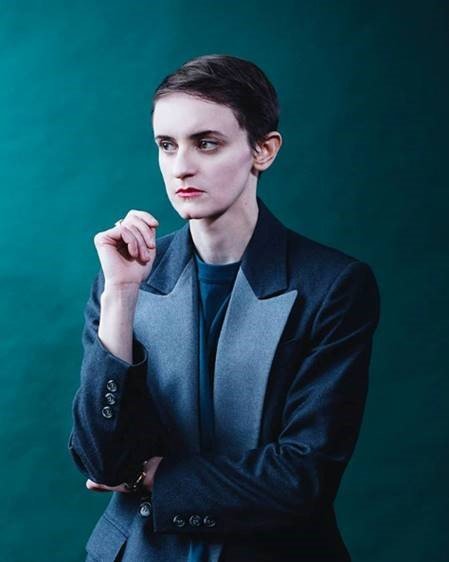 Canadian indie darkwave dance-pop artist Elizabeth Leslie releases “To The Next” and Brave Animal, a searingly insightful EP calling attention to a world grappling with problems of man’s making.

“To The Next” is one of three bewitchingly packaged in Brave Animal. The release stands as Leslie’s (she/her) monument to the contemporary ennui of living through climate change and capitalism as a non-binary queer person in a vastly heteronormative society.

“I wrote this song a few days after returning from a month-long trip to Europe,” Leslie explains for “To The Next” and its origins. “I went to the UK, where my family is from, and Germany.

“I had always expected the trip to be as enchantingly foggy, rainy, and temperate as everyone always describes it, but it was spoiled by constant sun, above average (hot) temperatures, bleached yellow grass, and blatant tourism — everywhere. On returning, I realized what is truly at stake: not only is our ecosystem, precious wildlife, and ability to live as a race on this Earth being compromised, but so are our dreams. And dreams are what save us from intellectual death… Figuratively, they’re what keep us alive.

“We are destroying everything that is beautiful in humanity and nature. We are destroying our history, our present, and our future all for empty, capitalistic gains… The illusion of ‘having it all’ while destroying it all. We are a highly delusional, self-destructing, patriarchal society on the brink of collapse. Living in our current age is anxiety provoking and depressing, which is why so many of us are experiencing mental health crises. We know something is wrong.”

Scenery is something Leslie would know; originally from the picturesque province of Nova Scotia, Leslie then spent most of her 20s interwoven through the Montreal music scene, playing in various local indie bands. Her career start was marked by assisting Chromeo, followed by composing with French duo françoise on the synth-pop project, Jesus Poster.

“Brave Animal is a tiny snapshot of different stages of my life over the span of eight years,” she reflects on the EP as a whole. “I made the album mostly on a shoestring budget in my home studio with the help of Gregory Takacs, a film editor and composer I met while working at a visual effects studio in Toronto. Being constantly pushed beyond our limits, we both quit within a month of each other and quickly agreed we’d much rather be working on music.”

“Shortly after, I started working at a music retail store,” she continues on the album’s earliest aughts. “There, I met Greg Hounsell, the guitarist of Brutal Youth. He listened to a few of our demos and was our first fan. He ended up introducing me to legendary music producer, Matt DeMatteo, who I shared instant creative chemistry with. Every version of a song he sent us was fantastically orchestrated… He took the songs to a whole new level. We’re currently collaborating on new material.”

“To The Next” and Brave Animal are available now.