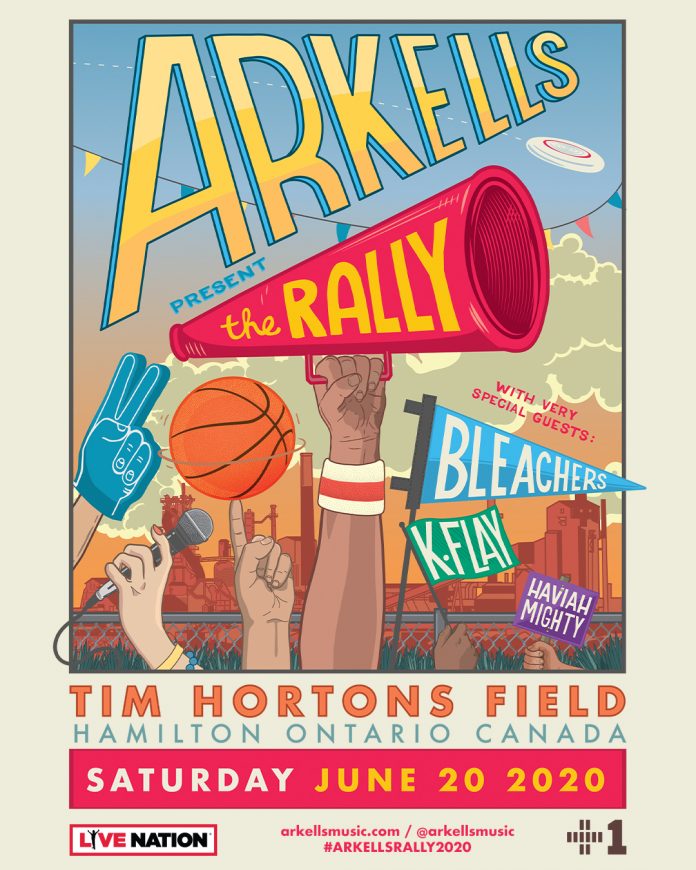 ARKELLS have announced the return to Hamilton for their in-demand, official kick-off to the summer – THE RALLY – live at Tim Hortons Field. Not to be missed: from the 905 to the 416 – this will be their only show in the Golden Horseshoe this summer.

“Our 2018 show at Tim Hortons Field – the inaugural Rally – exceeded our expectations in every way, so we knew we had to do it again. From hand picking the lineup to collabing with so many different local artists, small biz owners, charitable initiatives and local institutions like the HSR, Hamilton’s bike share program, Hamilton Flea, and the Ticats – it was a joy to show off some of the best that Hamilton has to offer. And we’re counting on all of you to beat the first one! The 2020 Rally features artists we’re incredibly honoured to bring to Hamilton: Bleachers, K. Flay and Haviah Mighty.

To our neighbours: if you’re walking, cycling or taking the bus – thank you for helping us host this thing and bringing all the good vibes.”

Arkells are proud to partner with PLUS1.ORG to support the causes that are meaningful to them and their community. For the return of THE RALLY Arkells are working to help strengthen long term, permanent and affordable housing for the community of Hamilton through Indwell.
Hailed by The Globe and Mail as “the right kind of band for this decade,” Arkells are widely considered one of the most passionate, exuberant and in-demand live bands working today. As radio mainstays, sport-sync shoe-ins and curious students of culture, Arkells have remained ever present – building awareness and personal community experiences around their live shows and new music at every turn. The most emblematic example of this being The Rally, Arkells hometown concert that sold 24,000 tickets and hailed as one of the biggest domestic shows in the country. To follow came North American and international headline touring that included their first sold-out concert at Scotiabank Arena and a stop later that year at Toronto’s premiere summer venue – Budweiser Stage – which sold out in 1 day. Arkells’ touring over the last year has cumulatively raised over $100K for charity, via the band’s partnership with Plus1, and the band has sold over 100,000 tickets domestically. 2020 – They’re coming. Giddy up.
PLUS1 raises and grants millions of dollars to high impact nonprofits addressing our most serious global challenges around Access, Equity, and Dignity. Through partnerships with concerts and live events, the work begins with a $1 per ticket add-on that makes fundraising simple and seamless. Beyond the show, PLUS1 supports artists and cultural leaders as educators and advocates, fueling their passion, reach, impact. To date, PLUS1 has raised and granted over $8 million, and served as the connective tissue between over 100 artists, millions of their fans, and hundreds of leading social and environmental justice organizations. Visit http://www.plus1.org