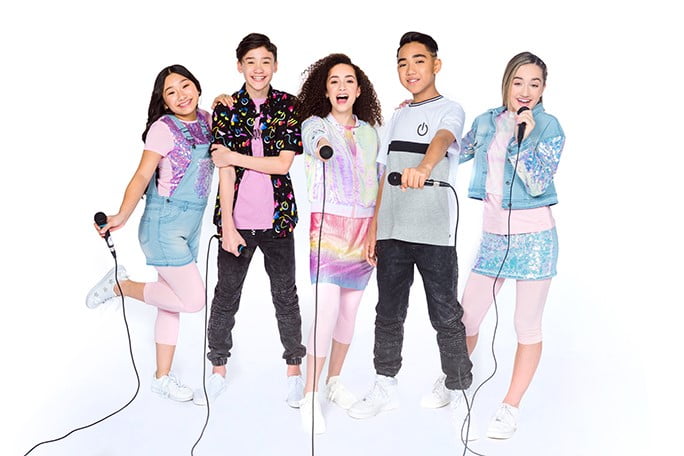 Thanks to Canada’s best-selling, chart-topping children’s music group MINI POP KIDS, fans nationwide can now dress just like the pop stars themselves with an exclusive clothing line launching with Walmart Canada this Spring!

Set is shipping now online at Walmart.ca — and in 117 select stores across the country as of today — the MINI POP KIDS Spring 2020 apparel and accessories collection will feature sizing for boys and girls sizes 4 XS – 16 XL.

First up is the ‘Rock Star’ collection, featuring a light, bright pastel palette paired with iridescent sequins and light blue denim for girls, and vibrant pops of colourful graphics with black denim for boys. Just in time for summer, the ‘Pop Star’ collection will follow soon after, using a base of blue and black denim shorts to highlight an electric neon palette of pinks and lemon and for girls and lime and turquoise for boys. A ‘Back to School’ collection is set for Fall 2020.

The move to create age-appropriate, on-trend clothing and accessories both kids — and their parents — can’t wait to get their hands on is a natural extension for the ubiquitous, legacy pop act long known for producing family-friendly versions of the world’s most popular songs. Fans across the country will now have the opportunity to dress up like the stars they see on TV, YouTube, and on-stage at packed MINI POP KIDS Live concerts.

From the 80s to now, the MINI POP KIDS have been entertaining global audiences with millions of albums sold; K-Tel stationed a Canadian re-launch for the group in 2004 and, for the past 16 years, the MINI POP KIDS have been the country’s #1 children’s music group with record-setting sales, extensive national touring, topping the iTunes and Billboard charts, and even the release of an original single, “Who You Are” — available now!

“The mission of the MINI POP KIDS has always been to provide family-friendly music all can enjoy,” says K-Tel’s Samantha Kives. “Working with a great family brand like Walmart is a no brainer.  We are working together to offer affordable looks that kids will love and parents will approve!”

“Walmart is excited to partner with MINI POP KIDS to launch this exclusive, on-trend and stylish collection,” says Marlise Wilson, Senior Director, Merchandising Kids & Baby, at Walmart Canada. “In Canada, we have been a destination for affordable apparel for 25 years and continue to expand our offering for our customers. We think MINI POP KIDS fans will be excited about these new looks.”

“We recognize the MINI POP KIDS are about more than just the music when we see all the fans dressing up for our concerts; it’s one of the most rewarding parts of why we keep the brand growing for over 30 years,” Kives expands. “The MINI POP KIDS are role models that embody everything around self-expression and we want kids across Canada to fulfill their dreams — not just at our shows, but every day while singing at home in the mirror, in their favourite outfit to their favourite song.

“We could not be more excited about partnering with Walmart on this new clothing release.”