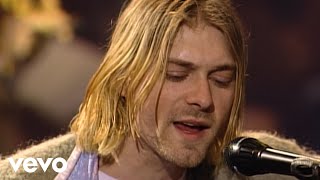 Nirvana’s Kirt Cobain earned critical acclaim for his acoustic performance of the song during Nirvana’s MTV Unplugged appearance in 1993. Canadian musician Neil Young described Cobain’s vocals during the final screamed verse as “Unearthly, like a werewolf, unbelievable.” This version was originally sanctioned to be released as a b-side to the band’s “Pennyroyal Tea” single in 1994, but the single was cancelled following Cobain’s death in April 1994. It was posthumously released on the band’s MTV Unplugged in New York album in November 1994, and as a promotional single from the album.