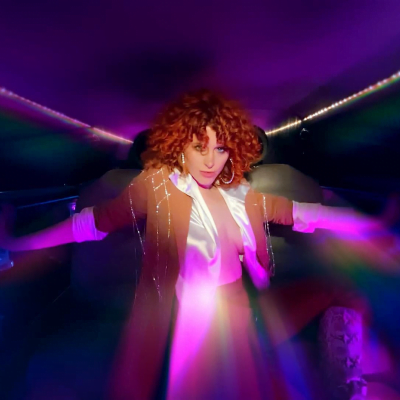 Canadian singer-songwriter Kiesza releases “All Of The Feelings” today. The bubbly, high-energy track is the second taste of her upcoming album out this spring. The track follows first single of 2020 “When Boys Cry”, which The FADER calls a reflection on “emotional expression and masculinity with light lyrics and bouncy production.” Kiesza proclaims her feelings for a love interest in the sparkling new song, celebrating the person who “makes [her] believe in love again” over an explosive pop beat.

The neon-hued accompanying video was shot entirely on iPhone 11 Pro and features performance artist Kirby Jenner and Ottawa-born rapper Charle$. Shot in a limousine where the “larger-than-life” (PAPER) performer vamps about as she sings the song and laughs with Jenner & Charle$, the video premiered on YouTube.

On the video for “All Of The Feelings,” Kiesza says it was “a work of the tribe,” referring to her new independent collective Zebra Spirit Tribe. “It was shot on essentially no budget, on an iPhone 11 Pro and a limo we found on Craigslist. What you see is a car full of friends who love and look out for one another. I’m so proud of the people around me and grateful for their presence in my life.” She adds that “shooting on iPhone made the making of the video feel less intimidating. I felt like I was in a limo with my friends, like there wasn’t a camera there at all—and I was able to open up even more. I love that we were able to produce such a high quality, stylized video.”

Kiesza is set to promote her new music this summer on the road with alt violinist Lindsey Stirling and indietronic artist Mako. Spanning the end of June to the start of July, the tour will take Kiesza across both coasts and include shows at the Microsoft Theatre in Los Angeles and Radio City Music Hall in New York City. Last year she supported MIKA on tour and played special headlining comeback shows at Las Vegas Pride and NYC Pride, as well as a string of stripped-down sets for her mini acoustic tour.

Re-emerging as an independent musician and staking her claim in the electro-pop scene, Kiesza ended 2019 by releasing two new singles, “Sweet Love”and “You’re The Best” via her label Zebra Spirit Tribe. With more new music on the way starting with “When Boys Cry”, 2020 is set to be a big year for the “eccentric” (Billboard) singer-songwriter who took the last decade by storm.