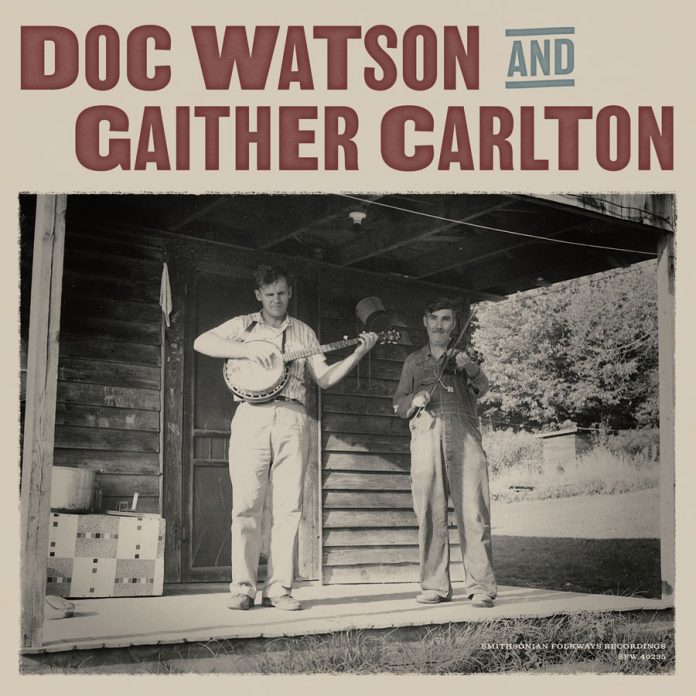 It’s hard to imagine a time when the brilliant guitar playing and Appalachian roots of Doc Watson weren’t a part of the American musical fabric. A famed artist in his day and a continuing influence on American music, Watson happened into the music industry much by accident, “discovered” by noted folklorist Ralph Rinzler in the early 1960s when he was mainly playing rockabilly tunes on the electric guitar near his home in tiny Deep Gap, North Carolina. Rinzler convinced Watson that audiences around the country were interested in the older music of Appalachia, and the nation soon fell in love with his heartfelt, powerful singing and his inimitable acoustic guitar playing. He inspired countless people to pick up the guitar and learn to flatpick the old melodies, much of this encouragement coming in person after performances. It was at the first of these shows in New York, really Watson’s first time headlining a show in the city (the previous time he’d played there he was one of two guitarists in Clarence Ashley’s band), that we get to hear this old music played by Watson and his fiddling father-in-law, Gaither Carlton. These live recordings from 1962 are to be released May 29, 2020, by Smithsonian Folkways as Doc Watson and Gaither Carlton on CD, digital, and vinyl. Most of these tracks have never been released before, and the recordings capture two masters at the height of their power, reveling in an audience that was there to listen, not just to drink and dance. It’s a moment where the rural Appalachian world of North Carolina came face to face with the urban New York world of young people desperate to learn folk music and to learn more about the Southern traditions they’d been discovering. These recordings show two very different worlds coming together, buoyed by Watson’s charming personality and his willingness to teach all who would learn.