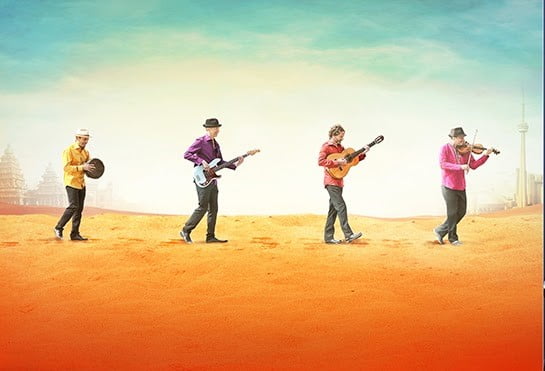 “We are so grateful that Sultans of String and our Refuge CD are among the year’s winning music projects in the The Independent Music Awards. This was truly a work of the heart, and we are so happy for these awards, to give this project and all our guest artists more visibility!” says bandleader, violinist and co-producer Chris McKhool, of Sultans of String. “Special shout out and thank you to co-producer John Bailey. Together, we travelled from Jukasa Media Group on Canadian First Nations land to New York, Istanbul and beyond to craft the sound of this epic culture-spanning album”.

The IMAs annual show and accompanying Indie Music Konference originally scheduled as 3-day June event in New York City, were cancelled as a result of the global pandemic. Instead, the winners in 104 Music, Video and Design categories, were announced this week on the The Independent Music Awards website and other online platforms. Branded playlists on YouTube, Facebook and Spotify feature award-winning music, artist interviews and other video content from honorees and Judges created from their quarantine hideaways around the world.

“This project centres around the positive contributions of refugees and new immigrants,” Sultans of String’s Chris McKhool offers, recalling his own grandfather who stowed away on a Lebanese ship bound for North America a century ago. “Each one of us in the world has a remarkable story to tell…

“For this album, we brought in over 30 special guests who are newcomers to Canada and the U.S., as well as global talents that have been ambassadors for peace,” he continues of the dynamic selection of collaborators, many of whom are GRAMMY and JUNO Award winners. “Refuge shares the beauty of these collaborations that feature special guests from First Nations, Turkey, Somalia, Iraq, Iran, Pakistan, Greece, Syria, Mexico, Portugal, Cuba, and Sudan.

“We wish to celebrate the successes of those who make the journey here, and bring their extraordinary talents with them. We hope the kinds of conversations we can have as musicians can provide a model for peace that our politicians and citizens find inspiration from.”

Together, they create a musical synergy that strikes inimitable — which explains their more than 40 awards and nominations, including three JUNO Award nominations, four Canadian Folk Music Awards, first place in the International Songwriting Competition (out of 15,000 entries), plus many more. They’ve toured extensively internationally at notable venues and festivals, including JUNOFest, Glasgow’s Celtic Connections, NYC’s Birdland, and selling out Koerner Hall several times over, landed on the New York Times and Billboard Magazine charts, and enjoyed appearances on BBC, CBC, Irish National Radio, NPR, SiriusXM, and then some.

In addition to bringing awareness to the topics surrounding Refuge, Sultans of String have continued to raise funds in support of the UN Refugee Agency; the $8,000 raised so far in 2020 will help provide medical supplies and attention, as well as clean water and shelter to some of the 70 million displaced peoples around the globe.