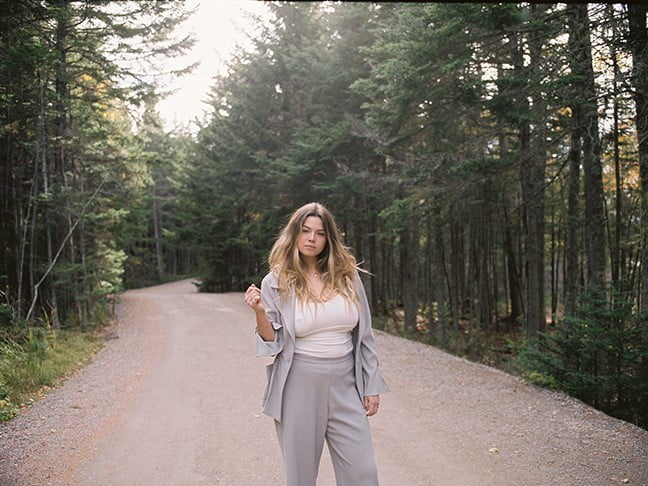 Alt.folk Saint John, NB’s Kylie Fox is sharing what was initially penned as a heartfelt wedding gift with this, the release of her new single “Cool Feet” — available now!

“I called the groom and gave him an interview,” she continues. “I was seeking some strange, obscure sentimentality in his answers, and I got it: he’s a fisherman, so I asked ‘when you are tired and uncomfortable at work, what do you miss about my friend?’

“So… I set out to write a song about my friend’s feet, but changed his answer to ‘cool’ because,” she laughs, quite rightly pointing out, “you shouldn’t sing about ‘cold feet’ at a wedding.”

It would be hard to sum Fox’s unique brand of song-based storytelling up with any other anecdote; “Cool Feet” is a fitting example of her sentimental soft-spot effortless intertwining with quick wit, signature sarcasm, and inherent empathy.

The second available off her forthcoming LP, Green, “Cool Feet” sets the tone for what’s to come following her 2017 breakout EP, BalconyEP. The results teem with unmistakable genuineness and endearing charm, traits that have earned Fox an attentive audience coast to coast, and features on CBC, charting on earshot!, festival stage spots, and more.

“I recorded with Dale in his remote Nova Scotian farm house,” Fox recalls of laying Green with East Coast Music Award-winning producer Dale Murray. “I would drive over from Saint John and stay for a night or two at a time throughout the summer to work on it.

“Dale’s wife (and fellow ECMA-winning artist) Christina Martin is an insane cook. I would relish in the opportunity to ask them about bizarre touring stories and professional advice while we shared meals and a bottle of wine at the end of a work day. Christina even bought fireworks for the session drummer’s birthday…

“The process was a dream.”