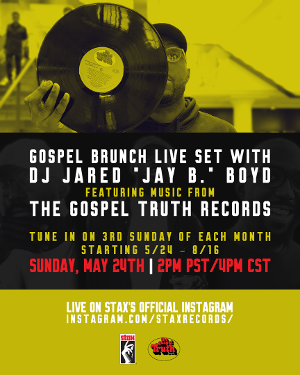 Debuting this Sunday (5/24) at 2:00 pm PT/4:00 pm CT @staxrecords on Instagram and continuing on the third Sunday of every month through August (2:00 pm PT on 6/21, 7/19, and 8/16), the new series is part of Stax’s tribute campaign to The Gospel Truth Records and leads up to the release of The Gospel Truth singles compilation in September (Gospel Heritage Month). The compilation will be available on vinyl, CD and digitally.

In addition to being a DJ and penning the liner notes for the upcoming The Gospel Truth compilation, Jared Boyd is a Memphis-based multimedia journalist with The Daily Memphian, co-host/producer of NPR’s roots music program “Beale St. Caravan,” and DJs at events throughout Memphis, including Memphis Tourism’s Music Hub events at Central Station. Jared has also reported for AL.com, It’s A Southern Thing, The Daily Mississippian, Jackson Free Press, and Commercial Appeal.

In March, Craft Recordings kicked off their campaign to honor the music of Gospel Truth Records, a subsidiary of Stax Records, with the first-ever digital release of 25 albums from the label’s catalog. Beginning with The Rance Allen Group’s 1972 self-titled debut (digitally reissued on March 13th), one title has been released in chronological order every week and will continue up until September’s Gospel Heritage Month.