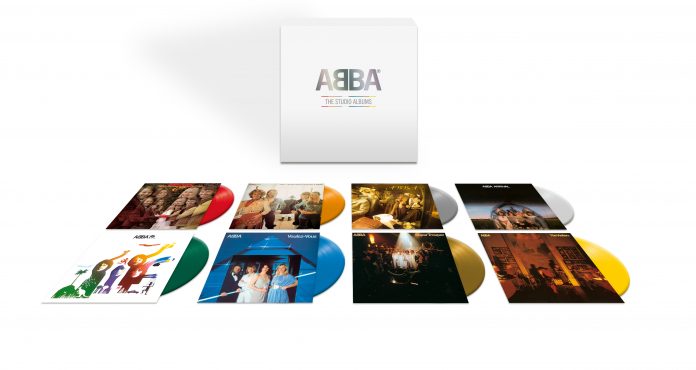 Nearly 40 years since the release of their last album, ABBA are celebrating their entire studio discography with an 8LP box set that features each of their groundbreaking records for the first time on coloured vinyl, and with replica LP artwork. Due for release on July 3, ABBA: The Studio Albums is an essential release for fans of one of the greatest pop groups of all time.

Across eight studio albums released over eight years, ABBA established themselves as a truly boundary-pushing force in music. Dominating the charts throughout the 70s, and continuing their winning streak into the early 80s, the Swedish four-piece redefined what pop music was capable of, with each new album charting an astounding artistic progression. Four decades after their last release, 1981’s The Visitors, their music remains a fabric of our culture, with stage shows, cinematic blockbusters and even themed restaurants bringing ABBA to new generations of fans.

Taken together, these eight albums represent one of the most stunningly creative runs in pop music history, setting the bar for all those who followed in ABBA’s wake.

Included in ABBA: The Studio Albums are:

ABBA’s debut album, Ring Ring, hit No.2 in the group’s homeland and even entered the Top 10 in Australia and Norway. With the title track topping the charts at home, it helped set the template for the incredible run of hits that would soon follow. ABBA would hone their diverse sound over the years to come, but Ring Ring is where they proved they could blend contrasting influences with a production style that remained uniquely theirs.

With their breakthrough appearance at the 1974 Eurovision Song Contest, ABBA became global stars. ‘Waterloo’, the song, topped charts around the world, setting the stage for its parent album to become the group’s first out-and-out classic. Its second single, ‘Honey, Honey’, remains a true fan favourite, thanks to its latter-day use in the Mamma Mia! musical, while tracks like ‘Watch Out’ suggested that ABBA had the era’s glam rock titans in their sights. Thanks to Waterloo, the 70s had finally found its era-defining stars.

If each ABBA album up to this point had been defined by one truly great single, the group had plenty in store for their self-titled third record. ‘SOS’ and ‘Mamma Mia’ remain the album’s timeless classics – career highs that only ABBA themselves could top – while ‘I Do, I Do, I Do, I Do, I Do’ was infectious enough to top the charts in Australia and New Zealand. With nods towards classical music (‘Intermezzo No.1 (Instrumental)’) and reggae (‘Tropical Loveland’), ABBA found the four-piece continuing to stretch themselves artistically, while turning out hits with almost effortless panache.

With its knowing title and witty album cover, ABBA knew they were destined to succeed with Arrival. The unstoppable success of ‘Dancing Queen’ topped the charts around the world – becoming the group’s first US No.1 in the process – while ‘Money, Money, Money’ and ‘Knowing Me, Knowing You’ added to the pile of timeless classics the group were now turning out with ease. Working at the top of their game, Arrival marked the point where ABBA perfected both the three-minute pop single and the sophisticated pop album. Not only one of the greatest records of the 70s, it remains one of the finest albums of all time.

Having set the bar higher than ever, ABBA – The Album needed to improve upon what had gone before – if that were even possible. Signposting Benny and Björn’s future focus on stage musicals, the album mixed ambitious theatricality with a pop sensibility, not least on ‘Thank You For The Music’, a song that was part of the ambitious mini-musical, The Girl With The Golden Hair, that ABBA treated audiences to during their 1977 live shows. Elsewhere, they built upon their Europop past with songs that took in the era’s soft rock influences, starting a new creative chapter that would find the band experimenting even further in the studio.

The first album recorded at Polar Studios, in Stockholm, Voulez-Vous ended the 70s as a reminder of why ABBA were the decade’s most important pop group. With no fewer than five hit singles (‘Chiquitita’, ‘Does Your Mother Know’, ‘Angeleyes’, ‘Voulez-Vous’ and ‘I Have A Dream’), it remains one of the band’s most successful albums – and the one that finally saw the group tour the US. With a 43-week stay on the UK album charts (with four weeks at No.1), Voulez-Vous was an invitation that could not be refused.

Starting the 80s as they’d ended the 70s, Super Trouper gave ABBA another global No.1 album and a run of hits that continued their stratospheric success on the singles charts. ‘The Winner Takes It All’ was a heart-rending ballad that would gain deeper meaning in the years to follow, while the album’s title track marked the peak of ABBA’s latter-day Europop sound. If Super Trouper was the sound of ABBA retooling themselves for the new decade, it proved they still had what it took to dominate the spotlight.

ABBA’s final album to date, The Visitors was also their seventh consecutive chart-topper; picking up from the introspection of its predecessor, it found the group maturing along with their fanbase. But even as personal turmoil surrounded them, Benny, Björn, Agnetha and Frida were in perfect creative harmony on songs like ‘One Of Us’ and ‘When All Is Said And Done’. Proof that their unique chemistry could never be repeated, The Visitors left fans the world over wishing that their stay had been a little longer.