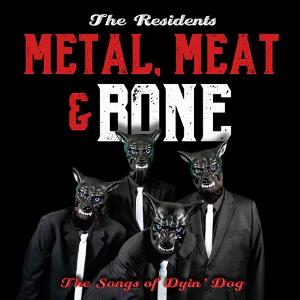 The world-famous art-rock group The Residents are never ones to look back as they are so often reinventing the face of the future. The Residents are set to release a new double disc recording, METAL, MEAT & BONE, based on newly discovered recordings of Alvin Snow (a.k.a. Dyin’ Dog). METAL, MEAT & BONE features 10 Dyin’ Dog Demos, 10 interpretations of the demos by The Residents, and six new works inspired by Dyin’ Dog. Black Francis of the Pixies is featured on the track “DIE! DIE! DIE!”.

To know the story of Alvin Snow a.k.a. Dyin’ Dog, one must enter the world of an ultimate outsider turned bluesman. Born on Friday, January 13, 1939, the albino was abandoned on the steps of an orphanage. Free from human attachments, Snow created his own reality from the fragments of life drifting through his consciousness while intruding thoughts were lined with the feeling life’s out to get him. Snow’s unspoken rage and overpowering air of entitlement allowed him to evade lawyers, angry victims and the police, but lurking in the dark creases of his psyche a beast haunted his every being.

The penetrating sounds of a jukebox pouring out of a small Mississippi town’s bar suddenly stopped him dead in his tracks one day. Mesmerized, the song slowly sucked him in. Howlin’ Wolf’s “Who’s Been Talking” was spinning and an overwhelming epiphany came over Snow. Buried emotions flooded back into the albino’s mind and as the self-reflective plea, “I’m the causin’ of it all,” echoed in his head over and over, a dawning awareness surfaced. After years of fraud, his life started to gain meaning for the first time. The malevolent force of an atrocious, mythical wolf who taunted his consciousness since birth turned into a majestic howl that led Snow to The Blues.

Of course, Snow had little use for the traditional trappings of religion, but unpronounced to him, a new concept of God developed in the shape of Howlin’ Wolf. He began to devour every song recorded by his new deity, and wrote songs of his own he’d go over and over, burning them into his brain. Snow adopted a menacing growl reflective of his hero, Howlin’
Wolf. Soon, the neophyte blues singer formed a band and rescued a pup from a hit and run accident.

Fancied quite the talent by a record executive who would come to back the recording sessions for his original songs, Snow would need to come up with a stage name. Everyone agreed Alvin Snow didn’t cut it, but it would take some thinking on his part to match the perfect name to his ruffled voice, and even more blemished character. Leave it up to some drunken college kids ramming into a parked truck in front of where Snow lived, a hospital bed subsequently fell on and crushed his newly acquired little pooch. Hence, the name Dyin’ Dog was born.

Before the debut performance of his 10-recorded demos on January 13, 1976, Snow vanished and was never to be heard from again. In September 2019, the Dyin’ Dog Demos were extraordinarily released as a Box Set. The Residents bring these long-lost songs to fans worldwide with the release of METAL, MEAT & BONE on July 10, 2020.

Constantly defying classification, THE RESIDENTS have been regarded as icons in the world of experimental music for almost fifty years. In addition to their groundbreaking work in the areas of trance, world fusion, electronica, punk, industrial and lounge music, the group has also been credited with being among the originators of performance art and music video, with their videos included in the permanent collection of the Museum of Modern Art. Their lengthy career has also taken them into the world of film and television music, having scored numerous films and TV series as well as several projects for MTV. In addition, the group is also thriving in the world of digital media having released ten DVDs, and two internet series.

In January, 2020, resurrecting their widely acclaimed 1988 album, God in 3 Persons, The Residents, in collaboration with noted video artist John Sanborn, created a major multimedia performance at the Museum of Modern Art. In addition, based on the newly discovered recordings of Alvin Snow, aka Dyin’ Dog, the group is completing their 49th studio album, METAL, MEAT & BONE. In April 2021, featuring the music of Snow, The Residents will embark on another world tour, which will also revisit Duck Stab, one of the band’s most enduring albums.