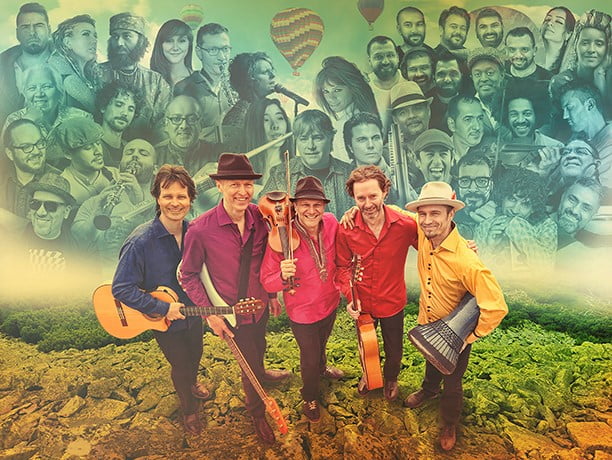 This song has recently been awarded ‘Best Instrumental Song’ by the Independent Music Awards; the album Refuge won the World Producer Award for production work by Sultans of String bandleader Chris McKhool and John ‘Beetle’ Bailey.

“This is a project that is centred around the positive contributions of refugees and new immigrants to U.S.A. and Canada,” says McKhool, whose Lebanese grandfather stowed away on a ship bound for North America a century ago. “We are bringing in special guests that are newcomers to this land, as well as global talents that have been ambassadors for peace.

“We wish to celebrate the successes of those who make the journey here, and bring their extraordinary talents with them.”

“My family’s story involves immigration,” featured artist Béla Fleck reflects. “Of course, we came in through Ellis Island, my grandparents on my mother’s side, Jewish-Russian refugees…

“I was really fortunate they were able to get out of a dangerous part of the world, and that America took them in at that time.

“The banjo is a story of immigration,” he continues. “It’s a perfect story of immigration… Involuntary immigration. The slaves came to the Americas not of their own free will, but when they got there, they brought their culture. They built banjos and they played their music, and it got incorporated into what would become American music and became a major part of it.

“Yeah, if the banjo isn’t going to welcome people from different countries, I don’t know who would.”

“I came to Canada in 1998 as a refugee,” Robi Botos shares. “But my case was rejected and I was nearly kicked out; basically, I’ve almost faced deportation. With the amazing help of musicians, fans, and people from all kinds of places from the music industry who supported me, it all worked out. It was very, very tricky and very hard for me to manage to stay in Canada.

“I feel just like any refugees,” Botos continues. “I always look at any refugees with those eyes, thinking about my case and my situation. I’ve been very blessed and fortunate in the music industry, too, considering I’m an instrumental artist who’s raising four kids.

“We have to look at refugees through those eyes where all of us came here from somewhere else. If it’s not us, it’s our parents or grandparents. I just think it’s amazing what a lot of refugees contribute.”