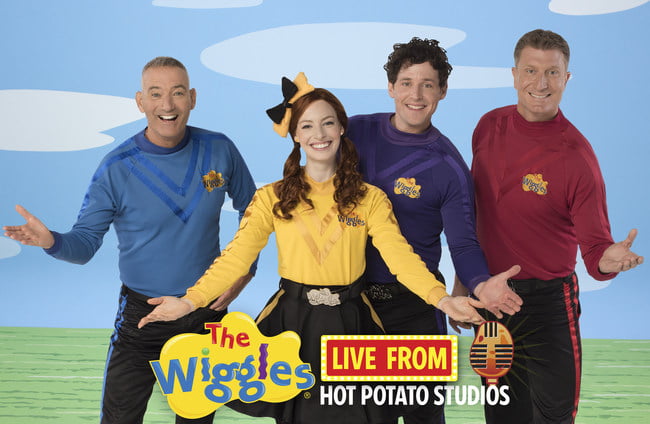 he Wiggles perform on average over 500 live concerts every year, making them one the most prolific touring acts, of any genre, in the world. But The Wiggles, like most people practicing social distancing, haven’t had the opportunity to perform a live concert since early March — until now!

The Wiggles are bringing their live show back to millions of fans around the world with The Wiggles – Live from Hot Potato Studios! This intimate series of concerts will give every fan of The Wiggles what they’ve always wanted — A FRONT ROW SEAT. Live from Hot Potato Studios will feature six separate live Wiggles concerts. The Wiggles will hit the road from their state-of-the-art Hot Potato Studios with the first show, “Let There Be Rock-a-Bye Your Bear” (a tip of that hat to fellow countrymen AC/DC) on Tuesday, May 5th. A new concert experience will take the stage approximately every two weeks. Each concert will be available on iTunes and Google Play and priced at $2.99 per concert, or $10.99 for the six-concert season pass.

Experience Emma, Lachy, Simon and Anthony as you used to be able to when they were live and on-stage, all from the comfort of your own home. Each concert is filmed live in Hot Potato Studios; with no editing, retakes or over dubs, to truly capture that live-in-concert feel so many Wiggles fans have enjoyed for nearly 30 years.

Join in for unscripted fun, impromptu moments of hilarity as the group navigate bringing their shows to life in the studio whilst practicing important social distancing. Each concert will feature a unique theme that aims to enrich, educate and entertain with all the Wiggly songs, dancing and fun fans have come to expect at a Wiggles show. You will truly feel that you have the best seats in the house as you enjoy Wiggling to The Wiggles – Live from Hot Potato Studios!