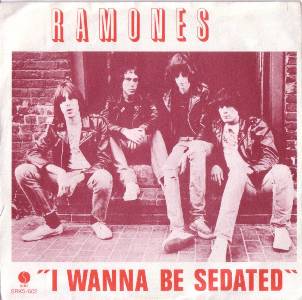 Originally released on The Ramones fourth album, Road to Ruin, in September 1978, I Wanna Be Sedated and was the B-side of the UK single “She’s the One” released on September 21,1978. The song was later released as a single in the Netherlands in 1979, then in the U.S. in 1980 by RSO Records from the Square soundtrack album.