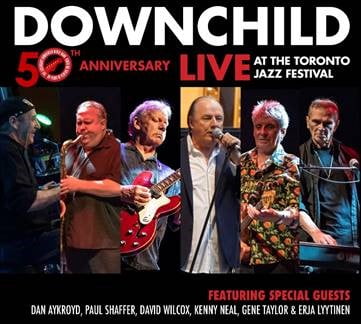 One year ago today to the day, The Legendary Downchild Blues Band shut down Bloor Street West in Toronto to kick off their 50th Anniversary Tour in Canada, with a blues party for the ages at the TD Toronto Jazz Festival, to over 10,000 fans, who packed the street to catch a glimpse of the world renowned band.

Downchild had a full slate of tour dates throughout the country this spring for the second half of their 50th Anniversary Tour, that was supposed to culminate with a grand finale show on June 22, 2020. Unfortunately, the pandemic hit, and the band had to postpone all their shows until this fall for the safety of fans and to follow the direction of Heath Canada.

While they cannot perform LIVE right now, the band felt the next best thing they could do was release a LIVE CD to lift fans spirits in this challenging time and give them a live music concert experience. Fortunately, producer, L. Stu Young recorded their historic show in Toronto last summer and was impressed with results when he listened back to the performance.

“Live At The Toronto Jazz Festival” is set for release on August 14, 2020 and will be exclusively available to purchase NOW through a special PRE-SALE on the band’s website here. The first 100 fans to buy the CD between June 22 – July 3 will receive a personally autographed copy and will get it in advance of the official release date. With the COVID-19 pandemic cause havoc for all touring Canadian musicians, Downchild will donate $5.00 for every CD sold to the Unison Benevolent Fund in support of their fellow musicians in these challenging times.

“We are honoured to be able to support a great cause like Unison, that truly takes care of our own, in supporting Canadian artists and Canadian music industry professionals in this difficult time. Like so many people across the country and around the world, the music community has been hit hard by the pandemic.” – Donnie “Mr. Downchild” Walsh

The Unison Benevolent Fund is a non-profit, registered charity that provides counselling and emergency relief services to the Canadian music community. They are there to help professional music-makers in times of hardship, illness, or economic difficulties.

2018 Juno Award winners, Downchild, include some of the most well-respected musicians in the country, who have performed together for over 25 years. Guitarist, harmonica player, leader and co-founder of the band, DONIE WALSH, lead singer and harmonica player CHUCK JACKSON, PAT CAREY on tenor sax, MIKE FITZPATRICK on drums, GARY KENDALL on bass, and former American super-group rocker MICHAEL FONFARA (of Rhinoceros/Lou Reed fame) on keyboards.