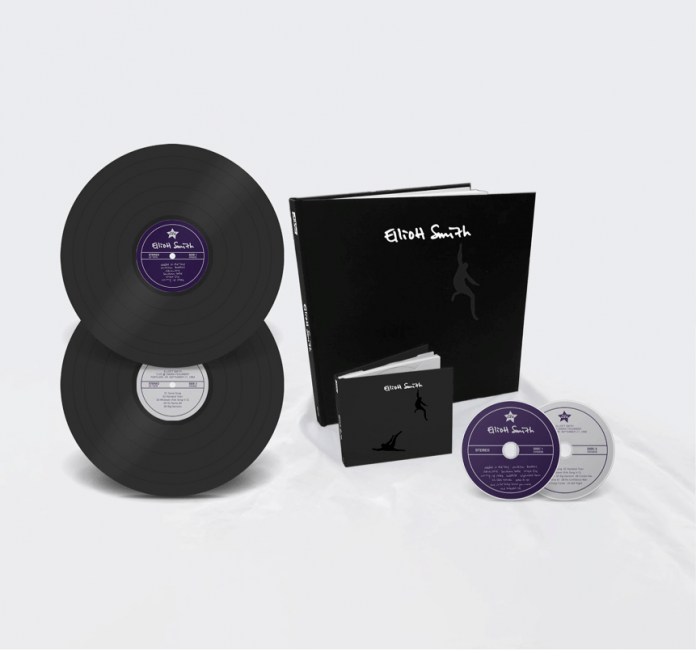 The impact of Elliott Smith’s music holds no bounds. He has been championed, covered, and sampled by artists from Billie Eilish to Pearl Jam to Frank Ocean and his distinct, solemn sound reverberates in the work of the National, Phoebe Bridgers and Bon Iver. To commemorate the twenty-fifth anniversary of Elliott Smith’s self-titled second solo album, Kill Rock Stars is set to release the Elliott Smith: Expanded 25th Anniversary Edition on August 28, 2020.

The package includes a revelatory new remastering of the original Elliott Smith record and a bonus disc of the earliest known recording of Smith performing as a solo act, from September 17, 1994 at Portland’s café and “art salon” Umbra Penumbra. The albums come encased within a 52-page coffee table book with handwritten lyrics, reminiscences from Smith’s friends and colleagues about his life at the time he was writing and recording this album, and two dozen previously unseen photographs from the era by JJ Gonson, who shot the image on the album’s cover.

Leading up to the reissue’s release Kill Rock Stars will be working with a handful of artists to release covers of Smith’s songs from this album. Artists confirmed for the project thus far include Bonny Light Horseman – the new project of Anais Mitchell (Hadestown), Eric D. Johnson (Fruit Bats) and Josh Kaufman (Muzz, Bob Weir, Josh Ritter), Marisa Anderson, MAITA, Prateek Kuhad and Califone, with more to be announced as we get confirmation.

When Elliott Smith was released in July 1995, it was so dramatically out-of-step with the later stages of grunge—and with the indie rock and Riot Grrl sounds associated with the Kill Rock Stars label—that it was completely ignored by the press but championed by artists from the Beastie Boys to Fugazi. “I’ve always felt like this record is underappreciated,” says Kill Rock Stars founder Slim Moon. “A lot of people overlook Elliott’s first two records—they think of them as a prelude to the bigger albums that followed—but when you go back, you discover they’re really great. This is Elliott’s most fragile and delicate music, and we wanted to honor that with a special and beautiful package.”

For this release, producer/engineer Larry Crane, the official archivist for the Smith family, dug through files, reels, cassettes, and DAT tapes to find the closest sources to the original Elliott Smith first-generation mix downs and spent days to carefully transfer and clean up the audio from the Umbra Penumbra high-quality cassette provided by Casey Crynes. “There are fan-traded MP3s out there of this show, but when people hear what I was able to extract from this original tape, they’ll be shocked,” says Crane.

The Umbra Penumbra show gives a sense of the contrast between Smith’s live and studio approaches. “He was goofier on stage, making jokes and messing with his own words,” says Gonson. “He worked the words very carefully—he was very admiring of Joni Mitchell and how she wrote. So it was fun, you’d hear a song and then it would change.” What emerged from this challenging creative evolution was a set of songs with the intimacy and intensity of an acoustic-based singer-songwriter and the gut-punch power of a rocker.

Smith’s joy and connection to the creative community in Portland, his home at the time, is beautifully documented by the photos and reminiscences in this new package. A few years after Elliott Smith was released, the singer himself looked back on the album that in many ways laid the groundwork for his image and his triumphant, ultimately tragic career. “I think that record gave me a reputation for being a really dark, depressed person,” he said, “but I think I’m just about as happy as all the other people I know. Which is occasionally.”