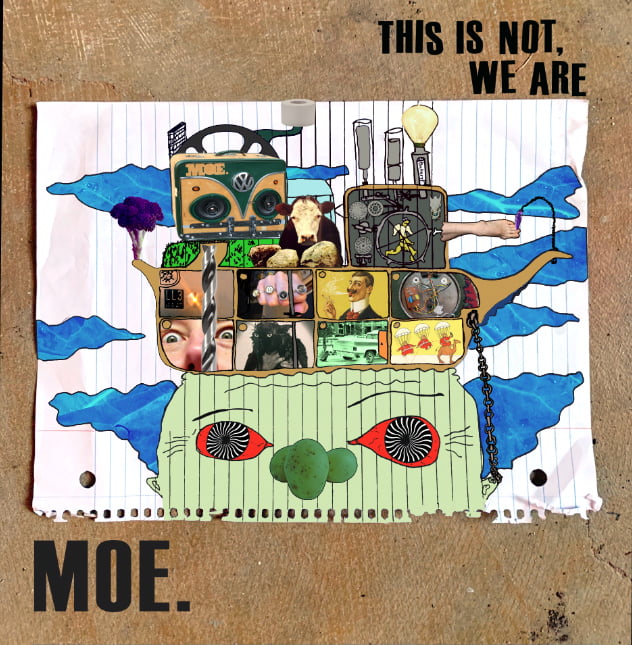 moe. is celebrating its milestone 30th anniversary year with the release of their long awaited new album – the groundbreaking jam band’s first studio LP in more than six years. THIS IS NOT, WE ARE arrives at all DSPs and streaming services on Friday, June 26 and will see a physical release later in the year.

THIS IS NOT, WE ARE – which marks the 12th studio album from moe. and first since 2014’s acclaimed NO GUTS, NO GLORY – includes eight new songs written by members Chuck Garvey, Alan Schnier, Rob Derhak, Jim Loughlin, and Vinnie Amico, most of which have been fine-tuned over the past two years while the band has spent time on the road. In addition, THIS IS NOT, WE ARE features one song making its first appearance anywhere, the Garvey-penned “Undertone.”

“We kind of went back to our roots a bit,” Derhak says. “We just wanted to do something that made us feel inspired like we had felt when the band first started. But it also has everything that we’ve picked up along the way, all the good baggage – and maybe some of the bad – that we’ve dragged along for the past thirty years.”

Hailed by American Songwriter for their “mind-bending musicality,” moe. is undoubtedly among our most vital and inspired bands, treasured for their mesmerizing musical synergy, expansive showmanship, and resonant songcraft. Since coming together in Buffalo, NY, the band has embarked on a truly original journey that has now spanned three decades, encompassing a remarkably wide-ranging discography rich with crafty, clever songwriting and genre-blurring creativity.