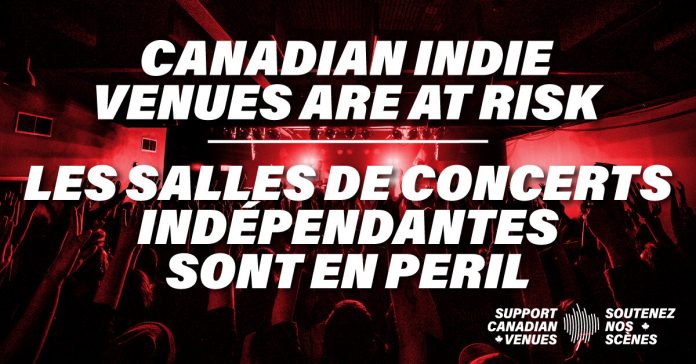 Hundreds of concert venues, booking agencies, independent promoters/presenters, production companies, and independent music festivals from across Canada have come together, donating thousands of hours of their time and immeasurable resources to launch the #SupportCanadianVenues movement as the Canadian Independent Venue Coalition. The movement is asking for decisive government support for independent concert venues, for which the COVID-19 pandemic has amplified an important and systemic financial fragility. The movement is Canada-wide and covers countless spaces that together define Canadian culture.

Recent industry research indicates that 96% of the independent music industry across Canada, including over 90% of independent venues, will disappear in a matter of months in the absence of a very significant financial aid package. CIVC is asking the federal government to commit substantial emergency funding and an economic stimulus plan for
the unfunded live music and touring sector in Canada. The Coalition maintains that without this assistance, there will be no Canadian live music industry to come back to when venues are finally allowed to re-open.

The CIVC is also calling on people to share the website (supportcanadianvenues.ca in English and souteneznosscenes.ca in French) and social media with friends and colleagues, with the hashtag #SupportCanadianVenues in English and #SoutenezNosScènes in French. Public engagement, sharing this cause, and writing political representatives (see the action page) will be crucial to the movement’s success, as will be the voices of Canadian artists, whose careers could not have developed, evolved or flourished without the partnership of venues across the country, from coast to coast to coast, who are now at risk of closing for good.

Independent companies working in live music – including venues, booking agents, promoters, and others – are a sub-sector of Canadian culture not funded by the government. This has created fragile business models across the country, fuelled mostly by passion. Unfortunately, passion isn’t the currency of choice during an economic crisis, and a strong majority of these companies will face bankruptcy if they are left without help to ride out what promises to be an extended shutdown.

“What does this mean for Canadian citizens? Those who revel in having a unique, diverse,
and effervescent culture can stop reveling. Those who yearn to discover new artists not yet supported by multinational corporations can stop yearning. Those who earn their career, modestly or otherwise, traversing our enormous nation and providing inspiration and meaning for crowds from St. John’s to Tofino, will cease to inspire,” says Jon Weisz, founder of Indie Montreal, co-founder of franconnexion.info and both founder and Executive Director of Les Scènes de Musique Alternatives du Québec, the association representing the province of Quebec’s small venues.

The Coalition hopes to encourage the federal government to introduce specific relief and
recovery assistance for the live music and touring sector. Since the federal government does not normally fund independent venues, there is a massive blind spot in its understanding of the role they play. The Canadian Independent Venue Coalition maintains that Canada needs to speak up.

What CIVC hopes to achieve:
● In the midst of a complete shutdown – that is, with no income for an indefinite period of time for independent venues – specific federal support is needed.
● We need the public and artists alike to voice what live venues mean to them. Our continued existence is essential to people’s lives and wellbeing.
● We need to educate the government on the role that independent concert venues play in the economic and cultural life of our country. Without us, there is no live music industry in Canada – this is the naked truth.
● Live music venues will be the last to re-open. We need to be in a position to do so as soon as it is safe, and with the public’s confidence in our ability to offer safe and incredible events.

The Canadian Independent Venue Coalition comprises hundreds of concert venues, performance agencies, independent promoters/presenters, production companies, and independent music festivals across Canada. They have come together to address concerns around venue closures due to COVID-19. In collaboration with the Canadian Live Music Association and other industries, businesses, and non-profit organizations, they are advocating for emergency support funding and an economic stimulus package for the independent Canadian live music and touring sector, which was the first to close and will be the last to open. With little or no revenue over an extended period of time, many live music companies will not survive without sector-specific government support. If enough Canadian voices amplify this message, the fate of independent live music venues could change!