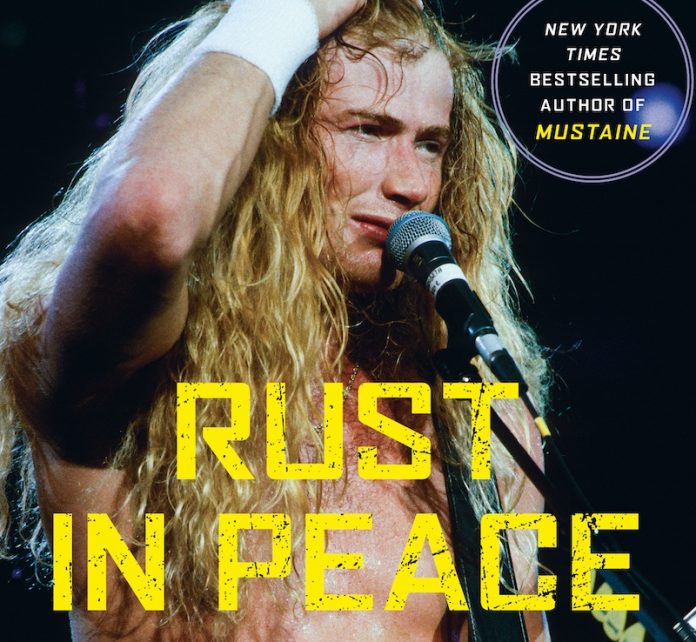 On the 30th anniversary of Megadeth’s thrash metal masterpiece Rust in Peace, lead vocalist and guitarist of Megadeth, Dave Mustaine will reveal the behind-the-scenes making of the iconic album in RUST IN PEACE: The Inside Story of the Megadeth Masterpiece available on September 8, 2020 via Hachette Books.

Released in 1990, at an incredible time of flux and creativity in the rock world, Rust in Peace still stands as one the greatest metal albums ever made. In his new book, Mustaine reveals the process of establishing Megadeth’s lineup and hiring the band and supporting cast. He details the pains of trying to handle the ensuing success, and ultimately the pressure of fame and fortune that caused the band to finally break-up. He also takes a hard look at the music landscape of the late eighties-early nineties.

Little did Mustaine know that the birth pangs of the record were nothing compared to the oncoming pain and torment that would surround it. Alcohol, drugs, sex, money, power, property, prestige, the lies the band was told by the industry – and the lies they told each other – were just beginning, and much like rust in real life, these factors would ultimately eat away at the band’s bond until only the music survived.

RUST IN PEACE is a true story of groundbreaking anti-pop that was moving toward the mainstream (or the mainstream that was moving toward the band), at a time of great cultural change, power, ego, drugs, and other vices that went hand-in-hand with Rock N’ Roll. It is about perseverance, of scraping off the rust off that builds over time on everything: ourselves, our relationships, pop culture, art, and music.

Dave Mustaine is known worldwide as the GRAMMY®-winning founder and leader of MEGADETH. His empire-building began 35 years ago as one of the inventors of the thrash metal genre as the original lead guitarist and contributing songwriter for Metallica. With MEGADETH, he has sold more than 38 million albums, earned a GRAMMY® Award and 12 GRAMMY® nominations, and five consecutive platinum / multi-platinum albums.

Joel Selvin is an award-winning journalist who has covered pop music for the San Francisco Chronicle since 1970. Selvin is the author of the bestselling Summer of Love and the coauthor, with Sammy Hagar, of the #1 New York Times bestseller Red, among many others. Selvin lives in San Francisco, California.