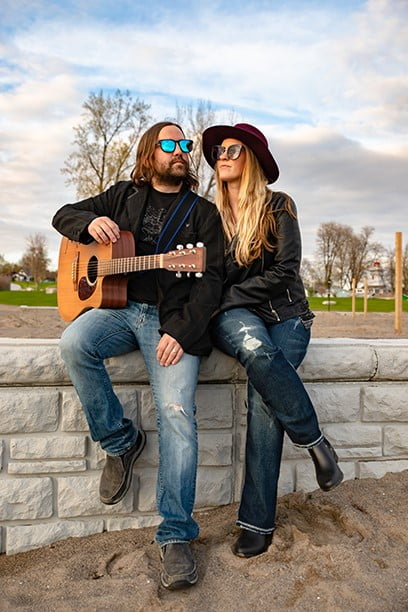 “A single event inspired me to write this song,” Fresh Breath co-front Josh Pascoe recalls. “It happened at one of our performances; we were playing and an audience member, I could see, perked up at the very first note.”

“She reached for her phone with excitement and began to film,” co-front Katie Pascoe adds. “You could obviously tell this person took a short video, posted it to social media, and then proceeded to talk through the rest of the song.”

“There wasn’t a single hoot, holler or clap (from her) once the song was complete,” Josh continues. “I thought to myself: nobody cares, it’s all about the likes and the shares.”

The pair focused their full attention on the track shortly after to fine tune it, and the result is a true team effort. “The song was tried several different ways,” Katie shares. “We went super pop with it, then southern rock…. But it just didn’t seem right.

“Then, once Josh added the piano track and I layered in some vocals, it felt very ‘Fresh Breath.’”

“There’s a destructive nature, we think, to our collective obsession with social media and hand-held devices on our mental health and well-being,” they say. “This song is a gentle reminder to be present and live in the moment.”

Beyond their growing 100,000+ streams across Spotify alone, the Ontario-based husband and wife duo have garnered critical acclaim and radio attention as they continue to release new music; 2020 singles have so far included “Tomorrow Today,” “Make It Together,” and “Time For a Change.”

Folk Roots Radio notes that they have “great energy, (and are a) great live band;” Buzz Music LA agrees, adding “good, high energy with an electrifying delivery… (Want) to see a performance like this live!”