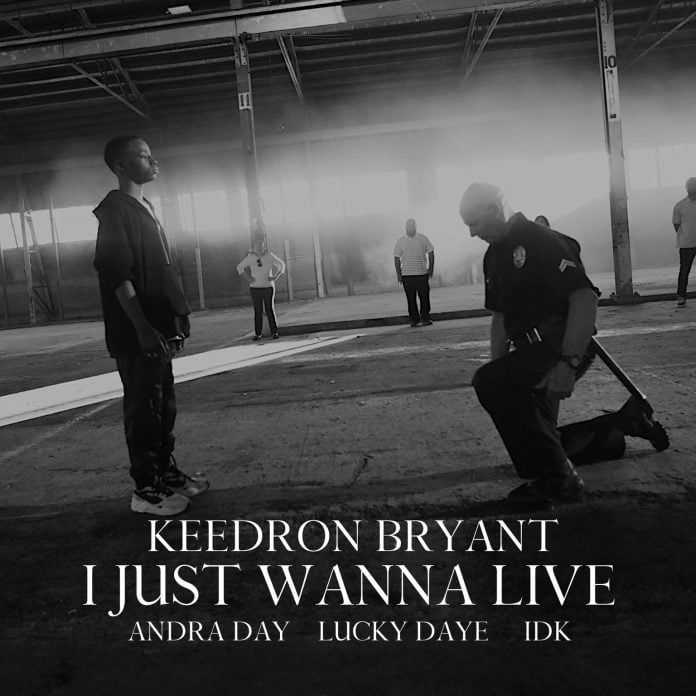 Adding even more power to one of the most important songs of the year and the clarion call for the Black Lives Matter movement, Keedron Bryant releases a new rendition of his single “I JUST WANNA LIVE” featuring Andra Day, Lucky Daye, and IDK today.

Keedron’s words ripple with intention and intensity as the all-star cast shines alongside him. GRAMMY® Award-nominated multiplatinum songstress Andra Day uplifts the chorus and delivers a thought-provoking verse. Meanwhile, Lucky Daye’s falsetto burns with a fire for change as IDK tears through potent, passionate, and politically charged bars and ponders, “How can my genetic make up make it so I never wake up, make it so I meet my maker…GOD!”

Keedron has become the voice of the Black Lives Matter movement. “I JUST WANNA LIVE” has notably garnered millions of YouTube views as Bryant earned widespread acclaim and an endorsement from President Barack Obama. He opened the 2020 BET Music Awards, appeared on ABC’s primetime special Juneteenth: A Celebration of Overcoming, and performed on the NAACP’s Juneteenth Black Family Reunion: The Music, The Moments, The Movement—available online [53:02 mark] and on REVOLT TV. Since its official release, “I JUST WANNA LIVE” has continued to attract fervent fan and critical support. Get ready for more music from Keedron Bryant very soon.

Singing acapella on a smartphone-shot video, Keedron Bryant moved the world to tears with nothing more than his powerhouse voice and the declaration, “I’m a young black man doing all that I can.” The 13-year-old Florida native’s YouTube performance of “I JUST WANNA LIVE” surged around the globe as a clarion call for change and the unassuming soundtrack to a moment of revolution. He performed the song on The Ellen DeGeneres Show via FaceTime, and received acclaim from Good Morning America, CNN, The Steve & Marjorie Harvey Foundation, Access Hollywood, and BBC News. Will Smith incorporated the clip in his “No Justice, No Peace” montage, and LeBron James posted it on Instagram with the caption, “I LOVE YOU KID! I LOVE US!” None other than President Barack Obama also cited it.

Born in Sicily to minister parents, Keedron began singing at just five-years-old. Attending church regularly, he developed a passion for gospel music. The budding talent first turned heads on season four of Little Big Shots. Represented by Heather Beverly, Esq. in association with Tabetha Plummer, Esq, and legendary producer Dem Jointz, Keedron catapulted to the top of the conversation in 2020, landing a deal with Warner Records and releasing the official “I JUST WANNA LIVE” single as his debut. With R&B energy, soul range, and gospel power, he will undoubtedly make a major impact.