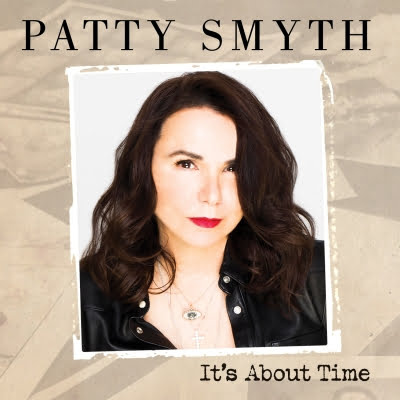 Out October 9th on BMG, It’s About Time pairs the same passion and ferocity the Grammy and Oscar nominee first introduced as the lead singer of Scandal with the hard-earned wisdom she’s gained from decades of touring, writing, acting for film, and raising six kids with husband John McEnroe.

Recorded in Nashville’s Blackbird Studios and produced by Grammy-winner Dann Huff (Taylor Swift, Shania Twain, Kelly Clarkson), these six songs – plus covers of Bobbie Gentry’s “Ode to Billie Joe” and Tom Waits’ “Downtown Train” – declare Smyth’s return to rock n roll as an artist who has embraced a new stage of life, but hasn’t shed the resolute and rambunctious defiance of her youth.

Patty Smyth explains, “People would always ask, ‘When are you gonna give us new music?’ I kept saying, ‘I’m gonna do it, I’m gonna do it…’ Finally I said, ‘Fuck it, man. I’ve just got to do it!’ I’ve been touring and playing shows with the same band for 12 years, just having a blast, and I finally went into the zone of writing these songs I felt were poignant and relevant for me. I started to realize this is a real thing that’s happening and just went with it.”

Watch the music video for lead single “Drive” below.

It’s About Time is largely rooted in the challenges and changes of relationships; Patty’s own and those of others. From taking care of yourself to taking control of your own insecurities, the album takes stock of the lessons she’s learned when life has felt too big to avoid. It’s a chronicle of thriving as well as surviving, though, and on tracks such as “Build a Fire” Smyth celebrates longevity, looking back on a quarter-century of marriage with McEnroe.

Since storming the scene in 1982, filling radio and video airwaves with the roaring hooks and iconic looks of hits like “The Warrior,” “Goodbye To You,” “Love’s Got a Line on You,” and other unforgettable highlights from Scandal’s Gold and Platinum-selling run, Patty Smyth’s solo career has included Grammy-nominated, chart-topping Don Henley duet “Sometimes Love Just Ain’t Enough,” the Oscar and Golden Globe-nominated “Look What Love Has Done,” Armageddon soundtrack contribution “Wish I Were You,” and more. With no regrets, Patty is once again ready to bring the love and kick some ass.