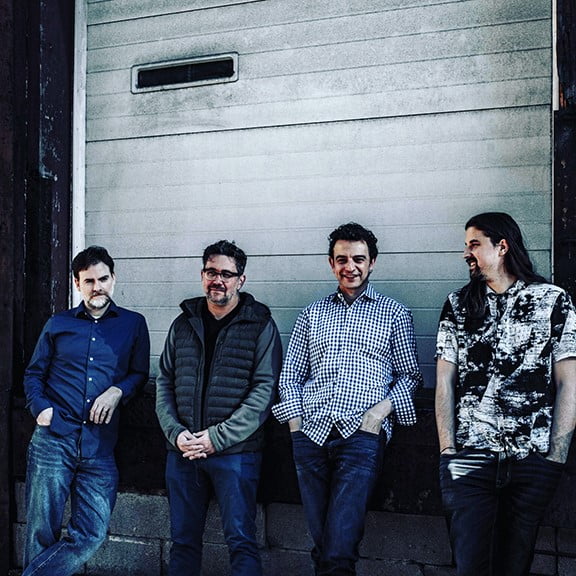 Chicago-based indie rocker Alan Zreczny and his band bluefront are still riding the Aftershocks following the release of their sophomore album this spring, including top track “It’s Not Over Yet” and its brand new video — available now!

Narrative poems set to spirited melodies, Aftershocks is a journey into the reverberation of emotional aftershocks enveloped in shimmering melodies and instrumentation deftly demonstrated by bandmates Jason Steele, Nick Kabat, and Mark Burns.

A lawyer-turned-singer/songwriter, Zreczny first picked up a guitar at the age of ten, having grown up in a house always filled with music and music lessons. His love for music and writing remained under the surface while he went to college, law school and grad school, and continued as he worked as both corporate in-house counsel and later at a law firm.

The thoughts about creating music were ever present: “I always thought of being a musician and writing songs as the most fulfilling modes of self-expression. And then, a terrible break-up happened.”

Inspired, Zreczny started writing and hasn’t looked back since. Unless, of course, it’s for valuable songwriting supply, which is the case for “It’s Not Over Yet.”

“Looking back, things are a lot more clear,” he reveals, marvelling a bit. “Let’s just say I was in one of those cliche relationships where it’s quite tumultuous and there are more breakups and ‘on-and-offs’ than you can count, or even care to admit…

“I just couldn’t see well enough to stop, and I couldn’t let go. I still believed (in the relationship) — or at least, thought I did. It’s funny, at least to me, because when you see this exact thing going on with a friend, it seems so obvious and you wonder what your friend is doing. All you can do is wait it out with them.

“Well, I think I discovered that it’s not so easy to discern the true state of affairs when it’s happening to you. This is pretty good evidence I was quite clearly in the midst of ‘it.’

“I would like to say there was ‘no more,’ but… There was,” he continues. “The irony that in an arc of songs I wrote, that the title of one is “Our Last Goodbye,” which is about the same person in “It’s Not Over Yet,” is not lost on me.”

Aftershocks and “It’s Not Over Yet” are available now.