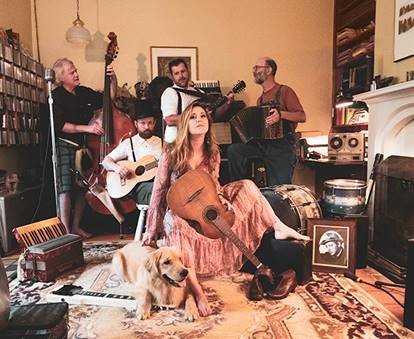 On Saturday, September 26th at the Capitol Theatre, award-winning Canadian singer/songwriter Jessica Rhaye & The Ramshackle Parade are set to celebrate the release of her highly acclaimed and sixth full-length album, Just Like A Woman – Songs of Bob Dylan — not to mention their first in-room live concert performance since the onset of COVID-19. Tickets are limited and available here.

Jessica Rhaye & The Ramshackle Parade will take the stage at the Moncton entertainment mainstay for a socially distanced show; while the theatre has a capacity for 750 seats, only 200 will be made available. Tickets are $26 and must be purchased in-person or by phone via the box office so proper spacing between ‘bubbles’ can be accommodated; the maximum size of a seating ‘bubble’ will be six.

Working within the ‘new normal’ of pandemic-related precautions will be worth it for audiences just to soak this release in; transcending expectations of a traditional ‘tribute album,’ Rhaye’s Just Like a Woman — Songs of Bob Dylan is a rollicking folk-rock interpretation of the famed artist’s classic songbook paired with hidden gems. The nine-track opus lands as engaging and inventive in its interpretations of the Master’s works, each with no click tracks and very few overdubs. The result is a collection of songs each at once retro- yet future-fitted with psychedelic undertones and folkie ballads only Rhaye and The Ramshackle Parade could relay.

“There is something about Bob Dylan’s songs we connect with,” says Rhaye. “The melodies and his simple ease of delivery… We feel like there’s an invitation, like it’s ok to feel they can be our songs.”

And ‘make them theirs,’ they do.

Dale Murray was the producer at the helm, and it was a free flow. All band members brought ideas to the floor, and imagined working in the style of Dylan in Woodstock, the days of the Basement Tapes and Big Pink, in the wake of the motorcycle crash.

“Dylan always approached production with a minimalist hand,” Rhaye continues. “The real people, the noises of the shirt buttons, chairs scraping the floor — mistakes being made — these were allowed to stay in the final tracks rather than cut out on the editing floor. These features always made his work accessible. You could always tell three were real people somewhere in a room playing these tunes together.

“That’s what we hope listeners take away from this record.”

Just Like A Woman – Songs of Bob Dylan is Rhaye’s sixth full-length release, her second foray into production with Dale and the first with the backing of The Ramshackle Parade. “The music from this band flows naturally but is also derelict, delicate, and pure,” says Rhaye of the ensemble that includes a bevy of award-winning and highly accomplished artists in their own right: Chris Braydon, Sandy MacKay, Clinton Charlton, Bill Preeper, and Dale Murray. The band name is “borrowed and bent from a tune on Joe Strummer and the Mescaleros’ Streetcore album.

“It felt like a good fit for the sound we came up with while making this record.”

Just Like A Woman – Songs of Bob Dylan Track Listing:

Ring Them Bells
Sad Eyed Lady of the Lowlands
As I Went Out One Morning
I Dreamed I Saw St. Augustine
It’s All Over Now Baby Blue
One More Cup of Coffee
I’ll Be Your Baby Tonight
Blowin’ In The Wind
Lay Down Your Weary Tune

Just Like A Woman – Songs of Bob Dylan is available now.

Jessica Rhaye & The Ramshackle Parade are set to perform at Capitol Theatre this Saturday, September 26th at 8:00pm. Tickets are $26 and limited.