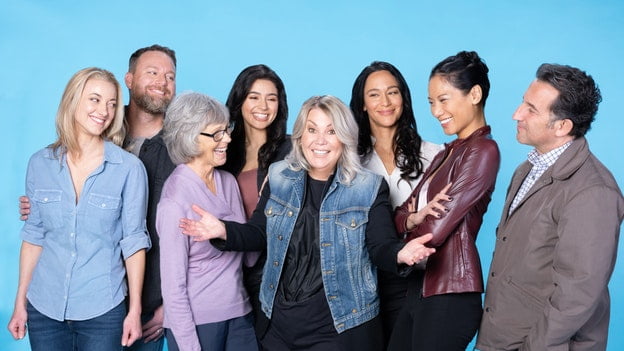 Set and filmed in Calgary, Season 1 of the critically acclaimed comedy is the most-watched new Canadian comedy series of the 2018-19 broadcast season, and garnered three Canadian Screen Awards nominations, including Best Comedy Series and Best Lead Actress, Comedy for Arden, and won Best Comedy Series at the 2020 WGC Screenwriting Awards.

“Jann’s” hilarious attention-drawing antics continue as the second season picks up immediately following last season’s cliffhanger finale, where viewers were left wondering: would Jann embark on a tour, or stay behind to help her mother Nora (Deborah Grover), who’s showing early signs of memory loss, and sister Max (Zoie Palmer), who was put on bed rest for the remainder of her pregnancy?

This season, Jann sets out to win her family and ex-girlfriend Cynthia (Sharon Taylor) back, as tensions arise between Jann and her new manager Cale (Elena Juatco), who lines up music gigs that are outside of Jann’s comfort zone. Throughout the season, Jann also faces a number of musical rivals, both old and new.

On the Season 2 premiere of JANN, titled “What Did Jann Do?” (Monday, Sept. 21 at 8 p.m. ET/PT on CTV), Jann cuts her Burning Woman Tour short to be there for the birth of her sister Max and brother-in-law Dave’s baby, and is surprised when nobody is happy to see her. She becomes determined to patch things up with her family and her on-again, off-again girlfriend, Cynthia. Meanwhile, a musical rival (guest star Sarah McLachlan) tracks Jann down, and she’s pissed. Episodes of JANN are directed by Ron Murphy (WYNONNA EARP, TRAILER PARK BOYS).

CTV.ca the network’s social accounts (@CTV) on Twitter, Facebook, and Instagram will roll out exclusive videos throughout the season, providing fans with a social extension of the series featuring unforgettable moments with Jann and the cast. The exclusive social and digital content includes behind-the-scenes blooper reels, outtakes, and featurettes including “Inside The Episode” – where the cast takes viewers inside key moments from Season 2.

Season 1 of JANN is also available to stream on CTV.ca and the CTV app for fans who want to revisit the inaugural season or catch-up.