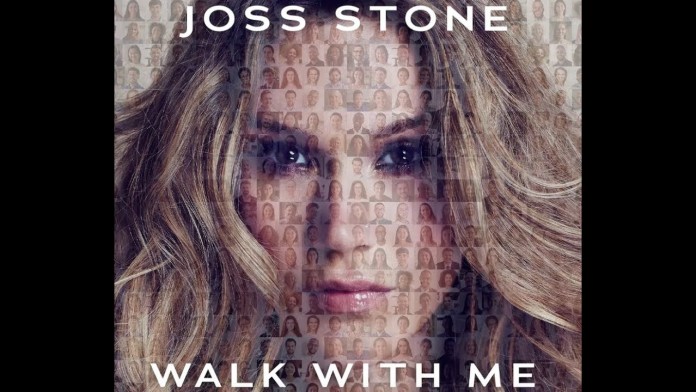 Platinum-selling and Grammy-winning UK soul singer/songwriter Joss Stone releases an empowering new gospel-tinged anthem “Walk With Me“ on December 11 via S-Curve Records/BMG. The song speaks to a different kind of love, one of love for thy neighbors, even complete strangers and anyone seeking togetherness at this time of uncertainty and ignites just in time to warm the souls and unite festive folks this holiday season after a tumultuous and divisive year.

“The song started out as a romantic song asking someone to walk through life with you, kind of like a wedding song if you will,” says Stone. “When we got to working on it so much had happened that I couldn’t take my mind off. With the pandemic and what happened with George Floyd that unfortunately sparked so much violence it got me thinking that the problem is mostly with the us and them attitude. That is the biggest killer – separation and judgement. Everyone needs to come together in order to survive this life in peace. Without togetherness nothing is OK”.

Co-written and co-produced by Jonathan Shorten who has worked with Stone since 2004’s platinum-selling Mind Body & Soul album, “Walk With Me” embraces the voices of Legato Vocal Ensemble in a heart-warming round of harmony and consolation.

Originally penned as a love song, Stone did a rewrite in light of recent events over the year.

“So I rewrote the song and I hope people take it in the way it was intended,” says Stone. “When I speak of the ‘heroes’, I am speaking of the brave doctors and nurses that have given so much of their lives to help others have one. And when I speak of ‘our brothers and sisters that cannot breathe’, it is a reference to George Floyd and the many others who have suffered injustice and suffocation in any way, be that physical or emotional. When I say ‘so take a hand’, I mean any hand, love everyone, we are in this life together. The only way things will get better is if we throw the divides and lines away and love each other regardless of colour or job or health. The fix is not to make those lines thicker. Let’s walk together. Through it all”.

The accompanying music video for “Walk With Me” also premieres today. Joss’ glorious performance is visualized in the headlines of a newspaper among all the overwhelming news around the world.

The often-barefoot performer has long portrayed an element of freedom and peace and Joss Stone further radiates these characteristics in her newly-launched “A Cuppa Happy” podcast which kicked off in July 2020. Stone’s feel-good show goes beyond her life as an entertainer and digs deep into various perspectives with guests that range from British comedian Bill Bailey to sex therapist Laura Berman to recording artists Shaggy and Boy George.

The first-time mom-to-be is also taking advantage of being at home cooking up something in the kitchen every Sunday on Facebook Live with “Cooking With Joss.” The raw and humorous interactive cooking show with recipes that include everything from garlic soup to British macadamia flapjacks to deviled eggs.

Joss Stone has been captivated by soul music since she was a little girl. As she moved through her early teens she intuitively honed her now trademark gravely-but-lustrous vocals by singing along to Aretha’s Franklin’s Greatest Hits. She began pursuing a singing career at thirteen, securing a record deal at 15, and recording her star-making Critically acclaimed debut album, The Soul Sessions, which was released in 2003. EMI/S-Curve Records.

Grammy and Brit award-winning Stone has since released 7 studio albums as she has continued in her journey of musical exploration.

At just 33 years old Stone has already enjoyed a long career. She has kept the company of musical royalty from the outset. Performing alongside many legendary artists such as James Brown, Herbie Hancock, Stevie Wonder, Gladys Knight, Sting, Van Morrison and Melissa Etheridge amongst many others. She has collaborated with and contributed to albums for many of the world’s finest musicians, including Jeff Beck, Mick Jagger and Damien Marley.

Her love of music and fierce independence has led Stone to break away from the constraints of being tied to a label and has enabled her to explore many different genres of music. The joy that she finds in her chosen artistry has helped her to forge ahead, always looking to break new ground both musically and in her life.

In 2015 her album Water for Your Soul was released, achieving the spot of the number-one reggae album upon release and voted best reggae album by Billboard. Water For Your Soul is rooted in reggae and sprinkled with world influences. Clearly demonstrating how the teen soul prodigy has blossomed into an artist of style and substance. It is an album that pulses with liquid grooves and dazzles with the mix and match sonic adventure of hip-hop, shimmering with the exotic sounds of world music while delivering the emotional belt of RnB.

Joss has completed her most audacious project to date – The Total World Tour – in which she has performed a gig and collaborated with local artists in over 200 countries around the world.

It is evident that Stone is an independent soul. A true free spirit. Some may call her rebellious, others would say that she is a young woman who is completely confident in her chosen direction and is at peace with all that that means.