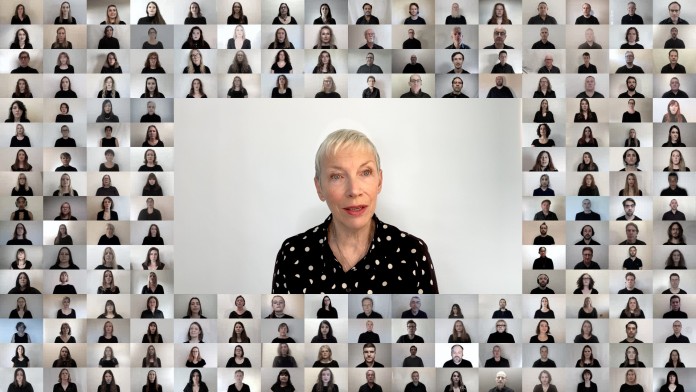 Today one of the most successful, iconic and revered artists in pop music history, Annie Lennox releases a virtual choral performance of “Dido’s Lament” with London City Voices choir.

Annie Lennox has collaborated with London City Voices choir to bring together a unique performance of her arrangement of Purcell’s “Dido’s Lament”, taken from the 10th Anniversary Edition of A Christmas Cornucopia released via Island Records.

The collaboration is in partnership with Greenpeace, who Annie has supported over numerous campaigns as an Ambassador, while Eurythmics supported Greenpeace and Amnesty for their Peace tour in 1999. Viewers of the video will be invited to donate to Greenpeace with this link.

Says Lennox: “It’s been such an honour and privilege to have been able to create this unique event in collaboration with the London City Voices Choir during this unprecedented time of the 2020 Covid 19 pandemic. I’m deeply touched and grateful to my friend and co producer Mike Stevens and choirmaster Richard Swan for making this possible. Also, to each choir member who took part from their homes through the medium of ‘Zoom’. As a long term supporter of Greenpeace I am deeply concerned by the Global Climate Crisis, which I feel is the most urgent challenge we all have to face, particularly with regard to sustainability for future generations. I very much hope to be able to make a contribution by drawing attention towards this vital issue. Additionally, I feel a tremendous sense of empathy and concern for everyone who has lost a dearly beloved friend or family member this year and hope this recording can offer a moment of shared collective mourning for those whose lives have been taken.”

London City Voices is a non-audition community choir made up of three branches across the capital who normally come together twice a year to perform in a 400+ person choir concert. If it wasn’t for the pandemic, the choir would have just performed at their Christmas concert. Each of the 276 members of the choir involved in this choral performance of “Dido’s Lament” video have learnt, prepared and recorded their parts from each of their homes during lockdown, overseen by founder and director Richard Swan.

“Dido’s Lament” is a classical aria written by Henry Purcell in the 17th century referencing the tragic love story of Dido and Aeneas as documented in Virgil’s legendary epic poem, The Aeneid, from the 1st century BC. Annie’s recording of “Dido’s Lament” is a unique arrangement of the classical piece, arranged by herself and co producer Mike Stevens.

Premiered by Jo Whiley on BBC Radio 2, “Dido’s Lament”, has also received radio support from Magic FM and Zane Lowe on Apple Music 1. Annie Lennox has appeared on the BBC’s The One Show and Russell Brand’s podcast Under The Skin over the past week, and is due to appear on Scotland’s Makar to Makar on 17th December and the BBC’s Andrew Marr Show on 20th December.

“Dido’s Lament” was released with an accompanying music video depicting a Victorian magic lantern show which starts with the wonders of the natural world, but soon becomes a stark warning of the future and an elegiac lament to the death of the Earth. As part of Annie Lennox’s collaboration with Greenpeace you can now also view this original music video for “Dido’s Lament” on Greenpeace’s Instagram and Facebook pages.

“Dido’s Lament” is the closing track on the digitally remastered version of Annie’s sixth solo album, A Christmas Cornucopia which features a new track listing and new artwork (across all formats – vinyl, CD and digital).

The music on A Christmas Cornucopia was mostly played by Lennox, in collaboration with co producer Mike Stevens, and originally recorded in his southwest London studio – at the bottom of his garden in 2010. But to achieve the resonance and vibrancy that were integral to Lennox’s ideas for these re-energized reboots, the pair also worked with a 30-piece orchestra at Pinewood Studios. And they travelled further afield too: to South Africa, to record with the African Children’s Choir, a remarkable organization with which impassioned campaigner and activist Lennox has long had a relationship.

A Christmas Cornucopia is far from a saccharine packaged selection box. As befits its title, it offers an abundant track listing drawn from British, French and German traditions covering the well-known alongside more untrodden ground. It’s broad spectrum encompasses a wide range of narratives and emotions – from joyful and celebratory thorough melancholic and haunting to poignant and timely. On “Lullay Lullay”, for example, Lennox draws direct links between the Nativity and the plight of Africa’s child soldiers.

Vibrant but vintage, classic and contemporary, glorious but with a polemical edge, Annie Lennox’s A Christmas Cornucopia is no ordinary collection of seasonal songs.