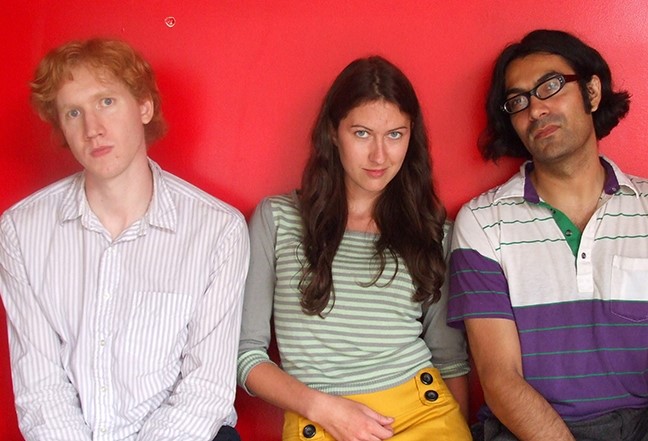 Chicago-based noise-pop rockers STAR are back with their sophomore offering, Violence Against STAR — available now via Half A Cow Records.

Theodore Beck (Gun Creeps), Scott Cortez (Astrobite, Lovesliescrushing), and Shannon Roberts (Future Silence, Gun Creeps) first formed after a meeting of the minds as market researchers in the motion picture circuit. As STAR — all caps — they pull influence from the likes of 80s horror cult classics to Bjork, My Bloody Valentine to Yoko Ono, David Lynch to Depeche Mode, and to Star Wars to Bob Dylan, and then some.

At 14-tracks, Violence Against STAR is the band’s second full-length and just as “crushing, highly melodic yet dense and instinctive,” according to White Light/White Heat; their breakthrough debut — Devastator (2007) — was received with:

TimeOut Chicago — “Beneath the mountains of fuzz guitar and restless lo-fi drum machines lies one thing no band can cover up: great pop songwriting. Led by the cold coo of vocalist Shannon Roberts this Wicker Park trio put together some of the most heartsick three-minute Brill Building jams all year.”

Illinois Entertainer — “As if broadcast from the bottom of a well and produced by Phil Spector’s wall of sound, Devastator – the 12-cut, 30 plus minute debut from STAR – might be the most irresistibly original sound out of Chicago since the rise of house and Wax Trax. Definite life transformation potential here.”

Denver Metropolitan — “When the realm of science fiction is less fantastic and more believable than the majority of love-based narratives society needs a champion like STAR to bring our heads out of the clouds. Devastator is the album to do that.”

Built on a Weak Spot — “Devastator is such a consistently good album there are no songs on it that fall flat or fail to deliver.”

Lost Music Ireland — “This is an excellent debut album consistently captivating from start to finish by a band proving to be a favourite emerging from the states right now for me.”

Sly Vinyl — “Melodic fuzzed out tunes of beauty and bliss.”

Violence Against STAR is available now.