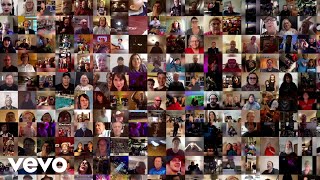 In what has been an extremely tough year for everybody worldwide, legendary singer Neil Diamond has been spreading some joy and togetherness across the globe. Today he reveals the results of a recent challenge set to fans worldwide, and the results are stunning – an inspirational, heartwarming Sweet Caroline Global Singalong video. Watch below.
﻿
Neil’s new studio album Neil Diamond With The London Symphony Orchestra, Classic Diamonds, smashed its way into the UK Top 5 on it’s first week of release at the start of the month, and as Christmas approaches, it’s risen to #2 in the latest midweeks, hot on the heels of Taylor Swift and sitting ahead of festive albums from Michael Buble, Gary Barlow and Ball & Boe.

The video arrives as fans were challenged last month to come together for a global singalong of his biggest hit ‘Sweet Caroline’. A site was launched at www.sweetcarolinesingalong.com where fans, celebrities & influencers alike, were able to upload videos of them singing along to Neil’s world famous classic. The singalong ran for a two week period between November 20th – December 4th.

In conjunction with the singalong, a ‘Sweet Caroline’ Tik Tok campaign using the original version of the hit song was also launched, running for a week and a half with contributions coming from some of the most influential Tik Tok creators, including Grandad Joe, The Harfin Family, Rosie & Harry, Sherice Banton, Callum Martin & Harvey Dudley. It has amassed just under a whopping 3 million views already, proving itself as a hit.

The new 14-classic song album Classic Diamonds, features new vocals from Neil Diamond paired with a new interpretation of Diamond’s most celebrated chart-topping hits performed by The London Symphony Orchestra. Recorded at both the world famous Abbey Road Studios in London and Neil Diamond’s studio in Los Angeles, the album was produced by Grammy®-winning producer/arranger Walter Afanasieff and co-arranged by Afanasieff and Grammy® winning conductor/arranger William Ross, who also conducted The London Symphony Orchestra for the recording.

Neil Diamond’s towering artistic achievements have carried him far, from Brooklyn Roads, to Glory Road, to Melody Road and now to Abbey Road. As a wordsmith and melodist, he is second to none and his music has touched generations in ways that are deeply personal, yet universally understood. These are songs of their time…and for all time. They are Classic Diamonds.